The employee responsible for the record-keeping ‘no longer works at Boeing’, a source told Defence One.

As a result, Army officials revealed to Defense One that they’ve recently stopped accepting Apache helicopters, or AH-64 aircrafts, until further notice.

‘At this time the Army is still conducting a comprehensive review of a number of Boeing processes, production, and manufacturing plans for critical safety items applicable to all AH-64E aircraft production,’ spokesperson Lt. Col. Brandon Kelley said.

Kelley added that at no time were soldiers lives put at risk.

The plant in Mesa where the employee had kept improper records overhauls old Apaches with modern equipment and builds new new ones. The company will continue to build new aircraft only while the situation is investigated.

When Beoing officials learned of its discrepancies, they alerted the Army immediately.

Steve Parker, vice president and general manager of Boeing Vertical Lift, added in a statement to Defense One that the factory was under review.

‘Boeing and the government are jointly reviewing our Mesa quality management processes and procedures,’ Parker told the publication.

‘Flight operations and deliveries will resume when Boeing and the Army are satisfied this issue has been resolved and appropriate corrective action plans have been implemented.’ 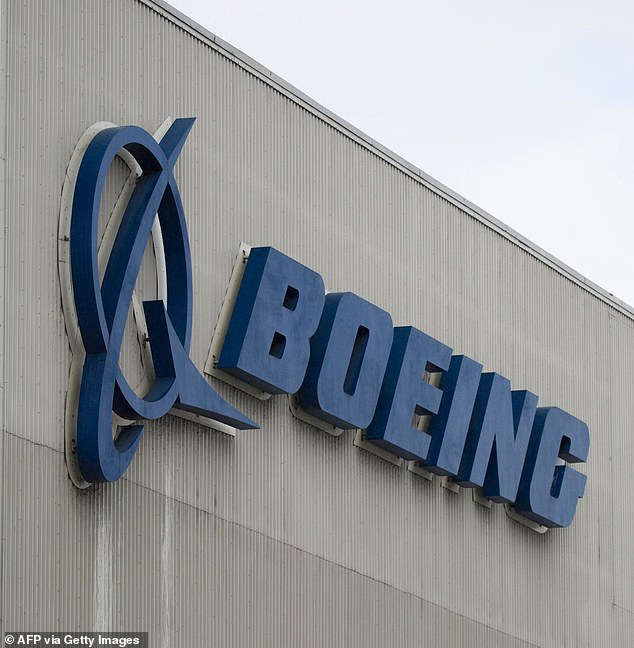 After learning of the incident at the Arizona factory, Boeing reportedly contacted Army officials immediately

It is the latest blow to Boeing, which is still reeling from the widespread fallout over its two 737 Max crashes.

The 737 Max has been shelved worldwide since March 2019 after two crashes that killed 346 people.

On October 29, 2018, a Lion Air flight 610 crashed into the Java Sea just 13 minutes after taking off from Jakarta, Indonesia.

The flight crew made a distress call shortly before losing control but the crash killed 189 people. 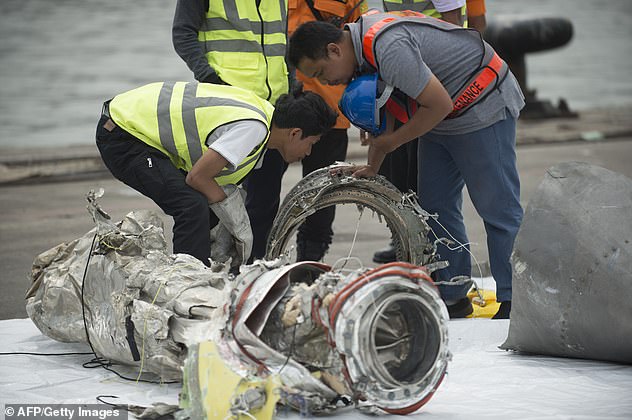 The Lion Air flight 610 crashed into the Java Sea on October 29, 2018, 13 minutes after takeoff from Jakarta, Indonesia. The fatal crash killed 189 people on board (pictured, investigators examine parts of the plane recovered from the sea) 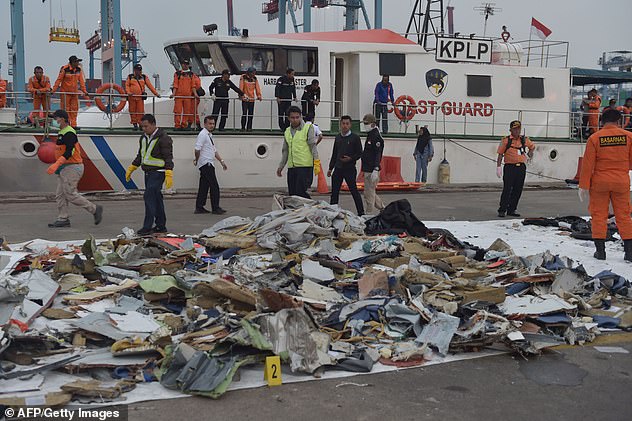 Less than five months later, a second crash occurred on March 10, 2019, when the Ethiopian Airlines flight 302 crashed, killing all 149 passengers and eight crew members on board.

The aircraft had departed from Addis Ababa Bole International Airport and was bound for Nairobi, Kenya.

Just after takeoff, the pilot radioed a distress call and was given immediate clearance to turn around and land.

But the plane crashed 40 miles from the airport, just six minutes after leaving the runway. The aircraft involved was only four months old.

The grounding of the 737 Max triggered lawsuits and investigations by Congress and the Department of Justice.

Questions were also raised about the FAA and Boeing’s safety approval process. 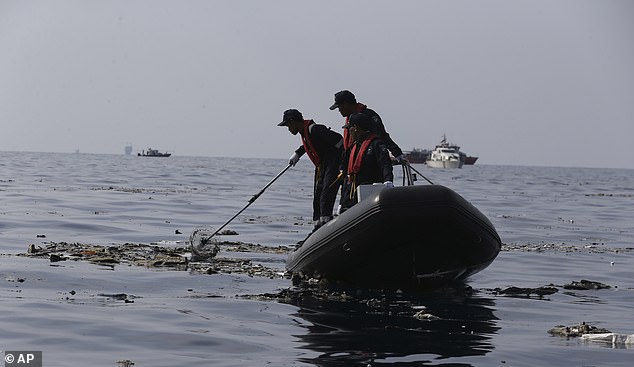 Pictured: Rescuers conduct search operation in the waters of Ujung Karawang, West Java, Indonesia after a Lion Air plane crashed into the sea 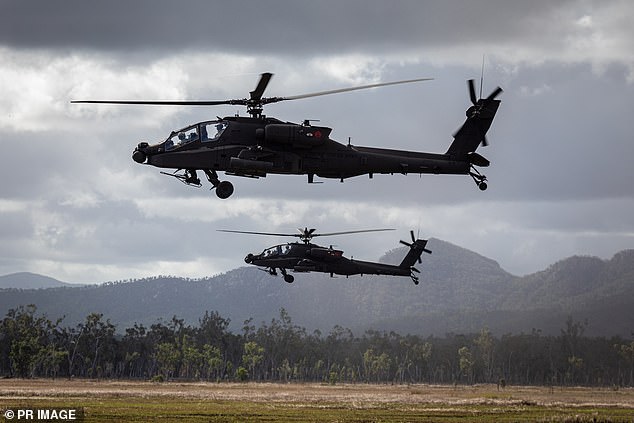 Army spokesperson: ‘The Army will begin acceptance of aircraft once conditions have been satisfied to ensure production processes meet standards for safety and quality and the potential for future quality escapes has been fully mitigated’

Investigators blamed faults in the flight control system, which the 103-year-old company has been overhauling for months to meet new safety demands.

According to Defense One, Boeing has faced similar troubles in the past.

The Federal Aviation Administration is in the midst of a manufacturing investigation into the Dreamliner aircraft.

And like other industries, the COVID-19 pandemic dealt Boeing a tough hand as air travel remained low and factory shutdowns sparked production lapses.

Recently, Boeing revealed that its billion dollar defense business would rake in more money than its successful commercial business for the first time in more than a decade.

By Associated Press and Keith Griffith for DailyMail.com

Boeing is reportedly considering selling its commercial-airliner headquarters in an effort to cut costs and stockpile cash.

The company is weighing a sale of its Longacres industrial park campus in Renton, Washington, which is used by managers in the jetliner division, as well as a building once used to train airline pilots, people familiar with the matter told Bloomberg.

Boeing purchased the 212-acre Longacres site, formerly a horse racing track, in the 1990s and converted it into an office park. 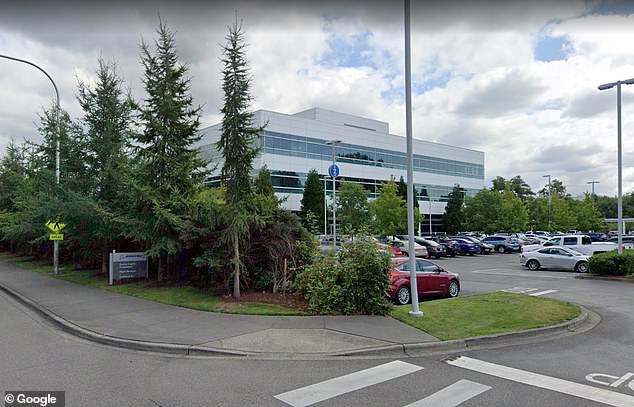 Boeing is weighing a sale of its Longacres industrial park campus (above) in Renton, Washington, which is used by managers in the jetliner division

If a sale were completed, managers of the commercial airliner division would be moved into vacant offices in a nearby plant, according to Bloomberg.

‘The Covid-19 pandemic has significantly affected air travel and the commercial aviation industry, including Boeing,’ Boeing said in a statement.

‘As we adapt to new market realities and position for the future, we are taking action across the company in five key categories: infrastructure; overhead and organizational structure; portfolio and investment mix; supply chain health; and operational excellence,’ the company said.

‘That includes evaluating ways to more effectively utilize our office space and reduce costs. Additionally, we can offer more flexibility for our teammates with a combination of virtual and on-site work space, while also ensuring that leaders and teams are closer to where the work is being done to support our customers.’

Meanwhile, Europe’s aviation regulator is closing in on a decision to allow the Boeing 737 Max to return to the air after it was grounded worldwide following two deadly crashes, according to a report Friday.

The European Union Aviation Safety Agency’s executive director, Patrick Ky, said he is satisfied that changes to the jet have made it safe enough to return to the skies before the end of the year, Bloomberg reported.

He was quoted as saying that ‘our analysis is showing that this is safe, and the level of safety reached is high enough for us.’

Ky said the development of a further sensor will take 20 to 24 months, and the agency had discussed with Boeing ‘the fact that with the third sensor, we could reach even higher safety levels,’ Bloomberg reported. 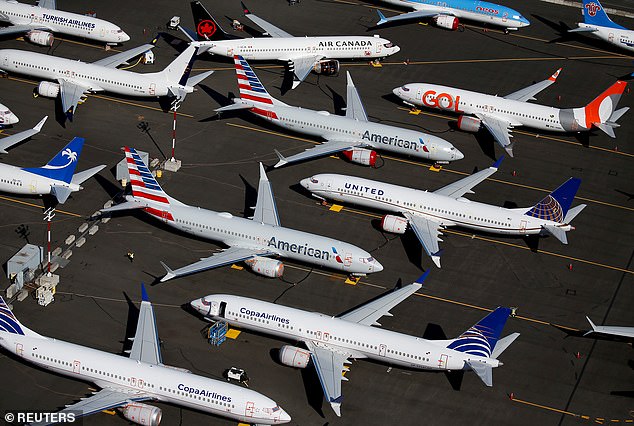 Grounded Boeing 737 MAX aircraft are seen parked in an aerial photo at Boeing Field in Seattle, Washington in July

EASA said that the article was accurate. It said in an emailed response to questions that it is ‘currently in the process of reviewing the final documents ahead of a proposed Airworthiness Directive for the Boeing 737 Max that is expected to be published next month for public consultation.’ After that is concluded, a final airworthiness directive will be published, it said.

Airlines began using the Max in 2017. There were nearly 400 in service when the planes were grounded after a 2018 crash in Indonesia and a 2019 crash in Ethiopia. Investigators have pointed to the role played by flight-control software called MCAS that pushed the noses of the planes down based on faulty sensor readings.