Has Covid’s variant-fueled fourth wave begun in Florida? ER visits for coronavirus symptoms are 30% higher in the Sunshine State compared to the rest of the US

The highly-contagious UK coronavirus variant could threaten the progress being made to curb the pandemic in Florida.

Although cases and deaths are continuing to decline in the Sunshine State, headway is being made more slowly than on the national level.

Recent data from the Centers for Disease Control and Prevention (CDC) shows that two percent of all emergency department visits in the U.S. are for coronavirus-like illness.

In Florida, that number is 2.6 percent, which is nearly one-third higher than the country-wide figure.

It comes as the state became the first in the U.S. to record more than 600 cases of the UK variant, with cases doubling almost every 10 days. 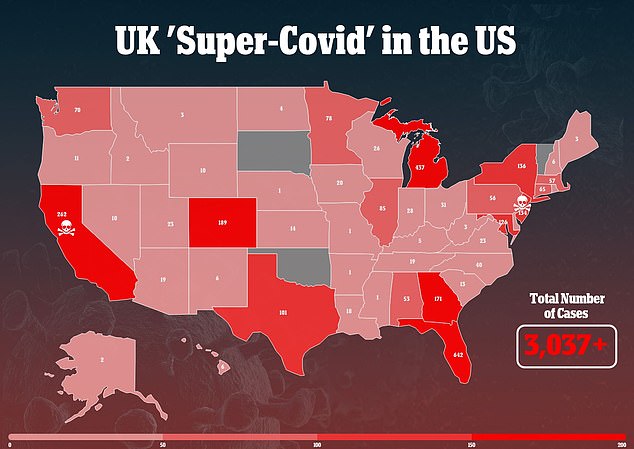 It comes as Florida became the first U.S. state to record more than 600 cases of the UK variant, known as B.1.1.7

The UK variant was first discovered in the county of Kent in September but was not deemed a ‘Variant of Concern’ (VOC) until December.

Its name, B.1.1.7, derives from the location of its most significant mutations.

It now accounts for at least 60 percent of all cases in Britain.

Most estimates put it at about 70 percent more infectious than older ‘wild-type’ coronavirus variants.

More moderate projections say its transmissibility is only about 56 percent higher.

Michigan, the state with the second-highest number of cases at 437, has a little more than half as many.

The first case was detected in a man in his 20s from Martin County, in southwest Florida, on New Year’s Eve with no history of travel.

This means it took just 66 days for cases to surpass 600 cases, meaning the number of infections in the state were doubling every nine days, according to a pre-print study.

The study also found that B 1.1.7 cases currently make up more than five percent of all cases in Florida, and will likely only increase. 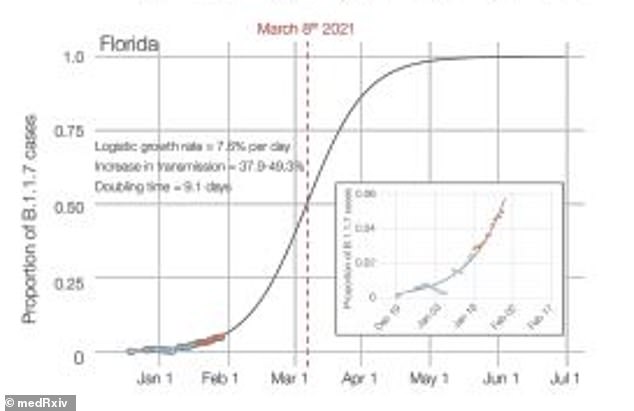 A pre-print study found that cases involving the new variant are most prevalent in Florida, doubling every nine days 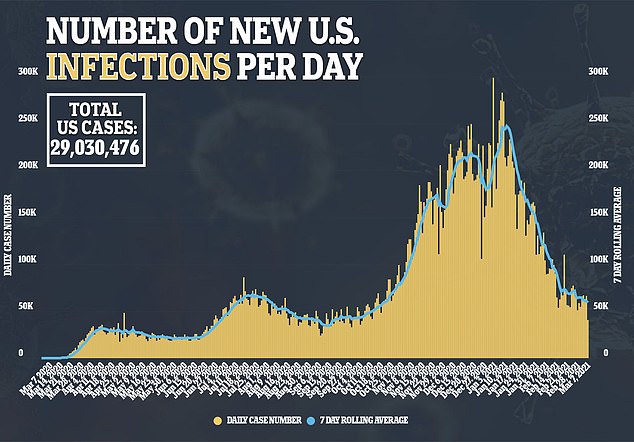 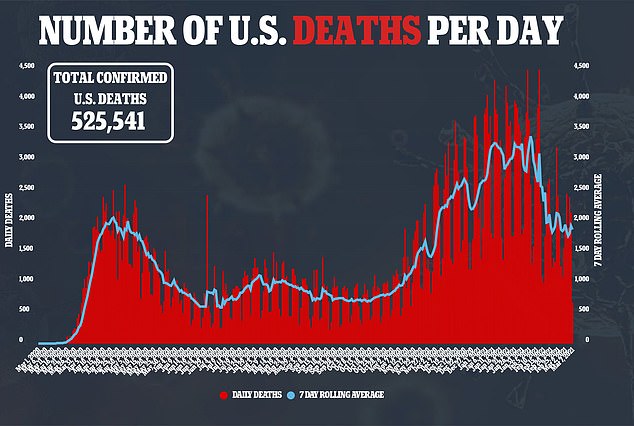 ‘Florida is leading the way in terms of one of the fastest rates of B.1.1.7,’ Dr Eric Feigl-Ding, an epidemiologist with the Federation of American Scientists, told CBS 12 News.

‘The natural contagiousness of the B.1.1.7 means that it will infect a lot of people.’

With Florida relaxing almost all of its COVID-19 restrictions, Feigl-Ding believes the state could see a surge of cases like it did in the summer.

He said the only way to control the virus is to ramp up vaccinations. So far, 17.3 percent of Floridians have received at least one dose of the vaccine, according to the CDC.

‘When this virus dominates the us we’re going to be in a heap of trouble if we don’t reach very high levels of vaccinations by March,’ Feigl-Ding told CBS 12 News.

‘We need to vaccinate now and as quickly as possible, because every day literally matters.’ 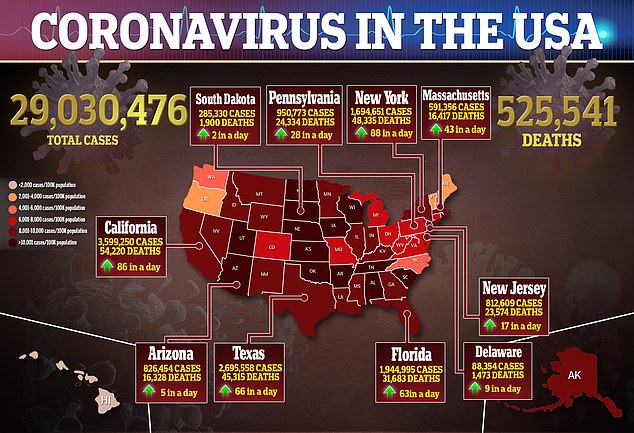