Hollywood at home! Four-year-old girl and her film fan father recreate famous movie scenes from Die Hard, Grease and The Shining to keep themselves busy over lockdown

A father-daughter duo have been recreating iconic scenes from cinema history in an attempt to pass the time during lockdown – with hilarious results.

Alex Zane, 40, from Hingham, Massachusetts, and his four-year-old daughter Matilda started recreating the movie scenes earlier this year in April when their state entered lockdown in response to the coronavirus pandemic.

The state prosecutor said he found himself at home most days watching his children and had been looking for an activity to keep his family busy.

He said: ‘One day she climbed atop a toy car in our living room and pretended to surf and for whatever reason I had a flash of Michael J Fox surfing atop Styles’ van in the 80s classic teen wolf. I have a good friend who is a photographer. I texted him a photo of her surfing on the car and he added the werewolf effects.’

He said: ‘The reaction is incredible. We thought maybe our friends and family might like these photos but the fact that strangers seem to enjoy them never gets any less exciting or surprising – just trying to create an 11 second distraction to people amongst the onslaught of negative news.’

The Shining: One of Alex and Matilda’s recreations is the famous scene in the Shining where Jack Nicholson’s character takes an axe to a bathroom door 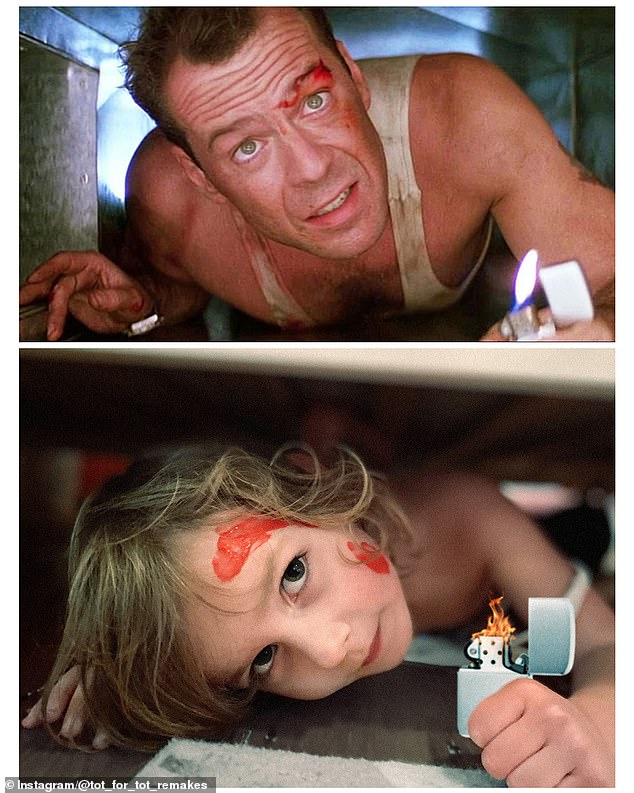 Die Hard: Whether you agree it’s a Christmas movie or not, there’s no denying that Matilda scrubs up pretty well as Bruce Willis in Die Hard 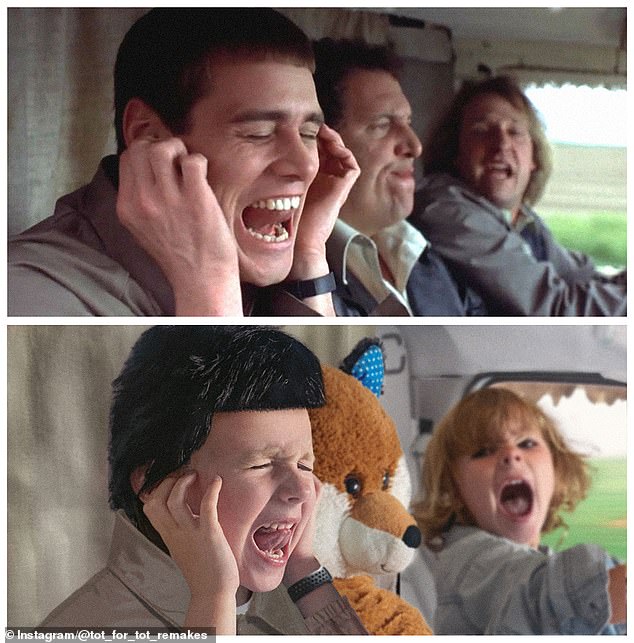 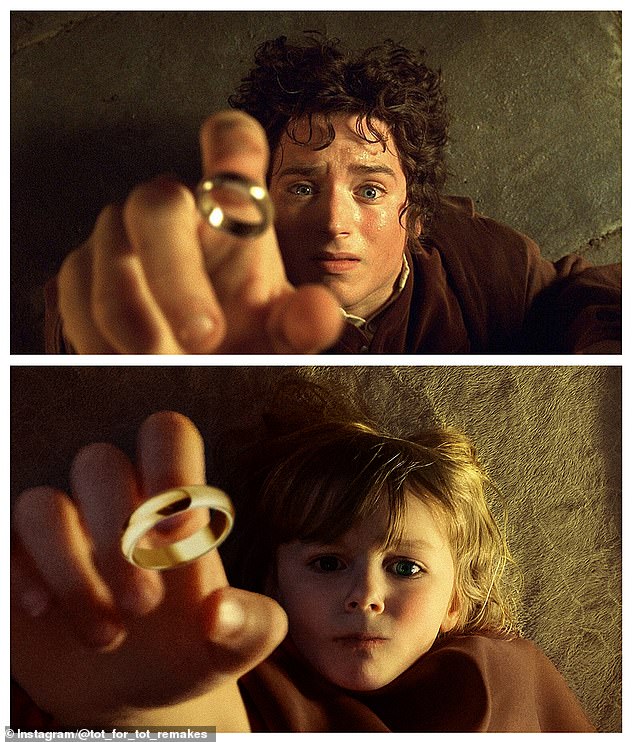 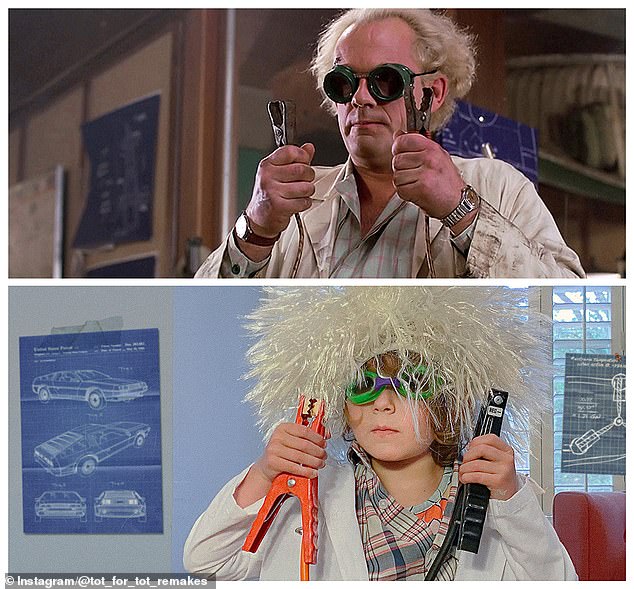 Back To The Future: Matilda looks ready to go back in time in this mock-up of the famous Back To the Future scene 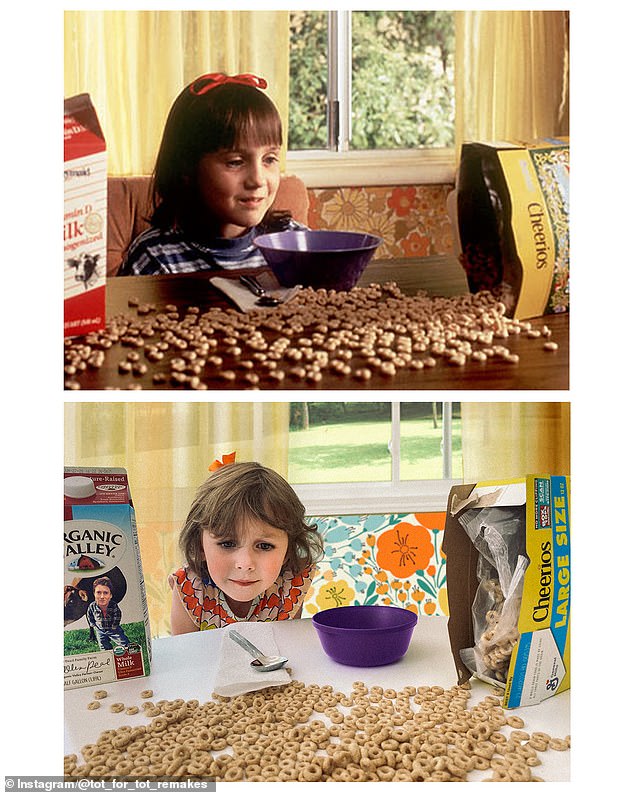 Matilda: Choosing to recreate a scene from the movie with her name, Matilda looks the splitting image of Matilda in the film based on Roald Dahl’s novel 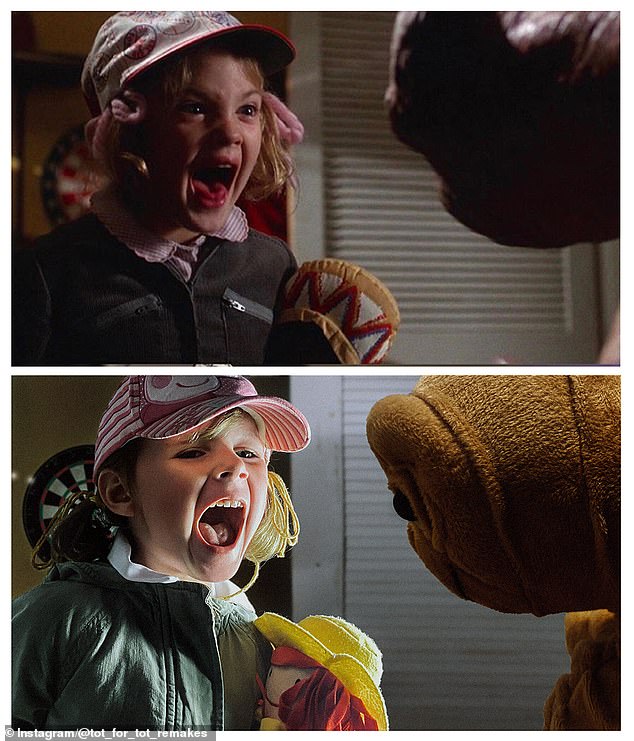 ET: Alex and Matilda recreate the moment ET is discovered, even adding blonde ‘hair’ to Matilda’s look to complete the scene 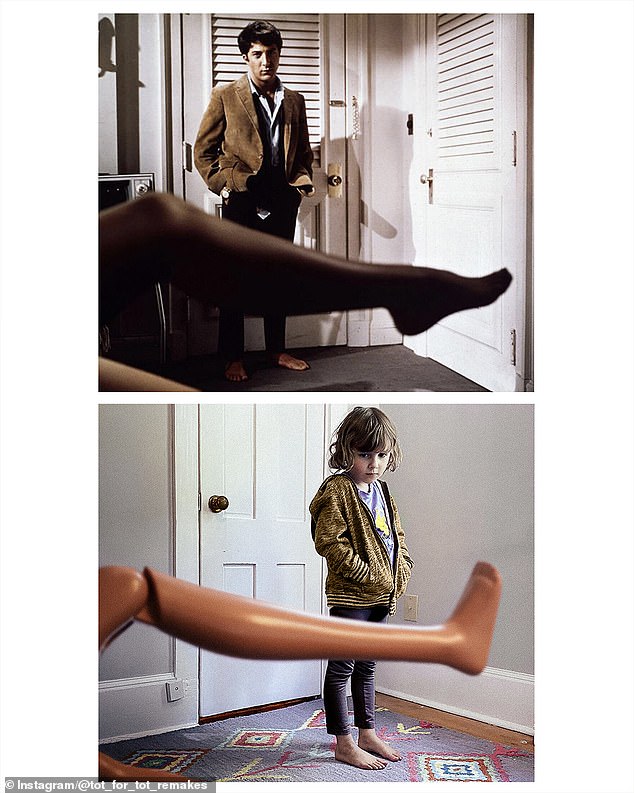 The Graduate: Alex and Matilda also recreated the infamous leg lift scene from The Graduate, using a doll as the leg model in their version 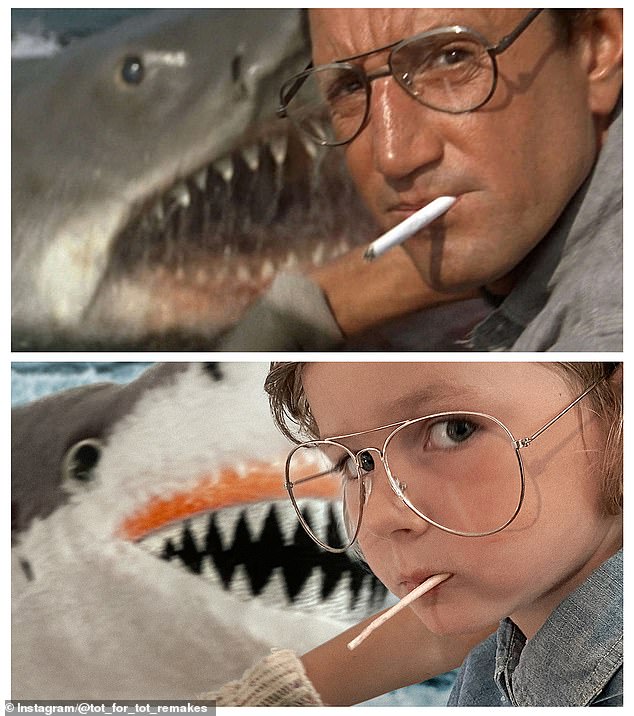 Jaws: Alex and Matilda are going to need a bigger boat in this recreation of Jaws, though the shark in their version doesn’t look quite so scary 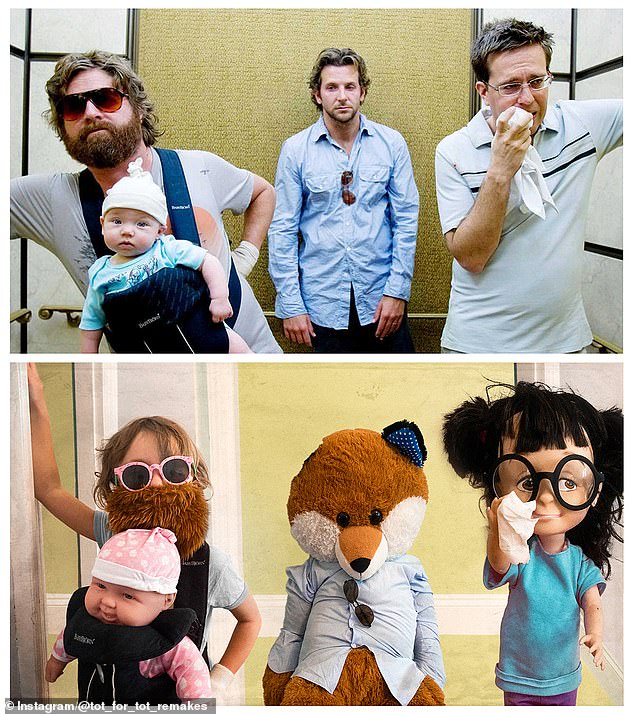 The Hangover: Matilda plays a convincing Zach Galifianakis in this mock-up of The Hangover elevator scene. Dolls and a plush toy make up the rest of the Wolf Pack 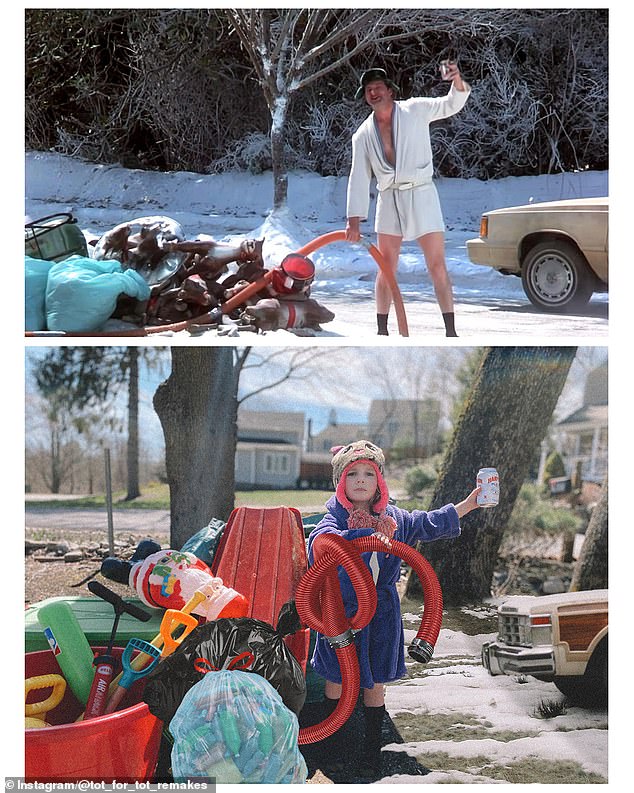 National Lampoon’s Christmas Vacation: With Christmas around the corner, it’s only fitting that Alex and Matilda recreated this iconic moment 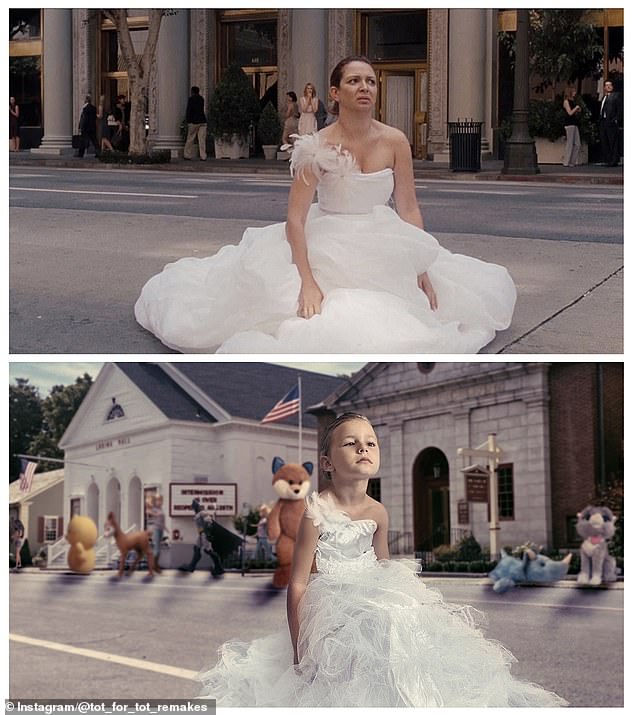 Bridesmaids: Matilda’s recreation of this cringeworthy Bridesmaids scene is near perfect, and the toys acting as passersby work surprisingly well 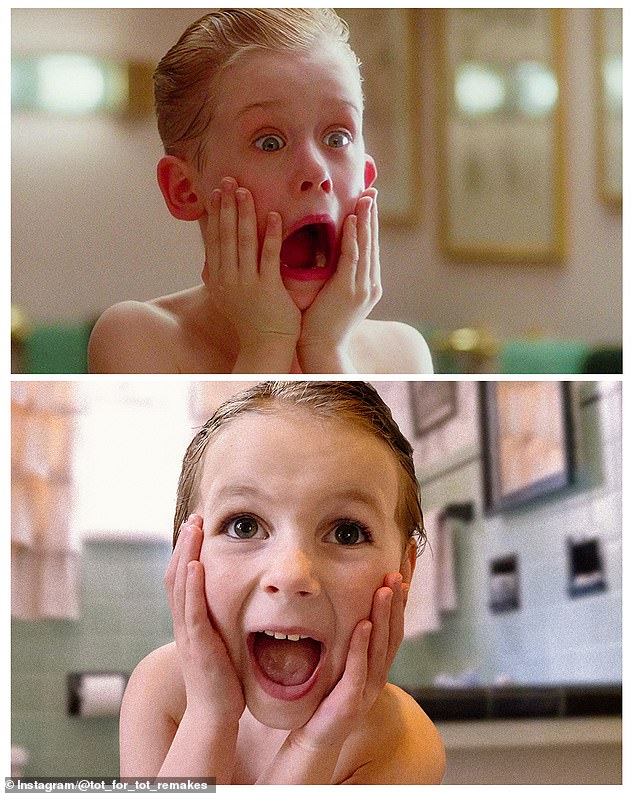 Home Alone: Shaving is never fun and Matilda reimagined the scream Kevin lets out in Home Alone after applying aftershave to his face 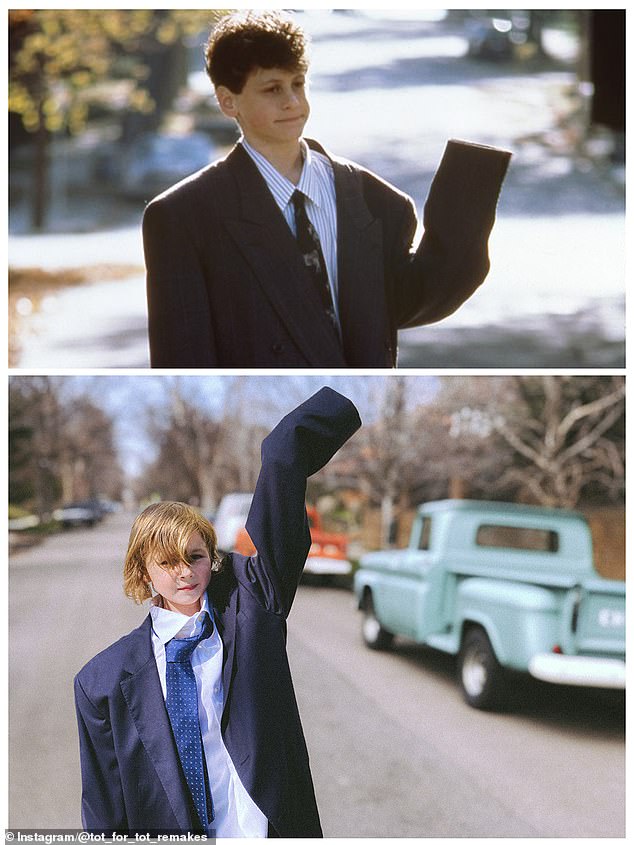 Big: With an equally-ill fitting suit, Matilda does a great job of acting out the ending to Tom Hanks’ Big 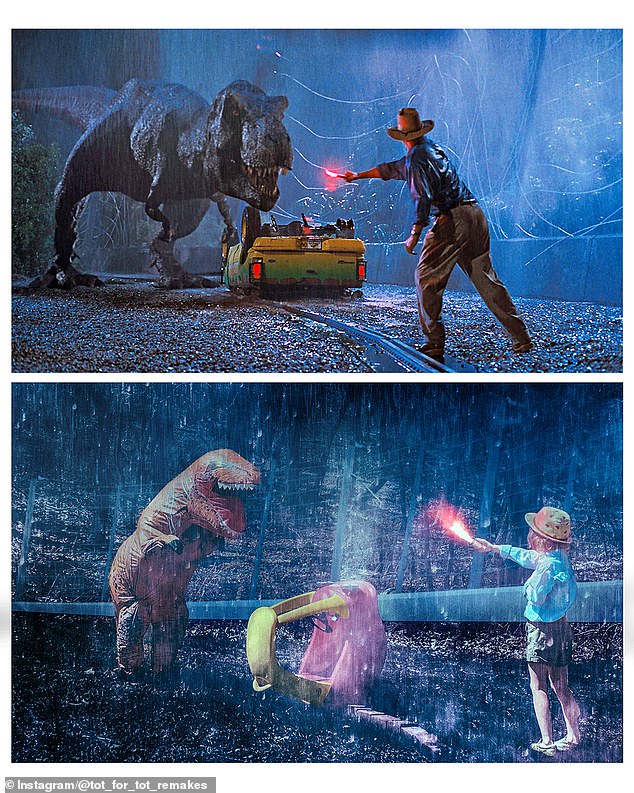 Jurassic Park: The use of a blow-up dinosaur costume gives this dramatic scene from Jurassic Park a comical element 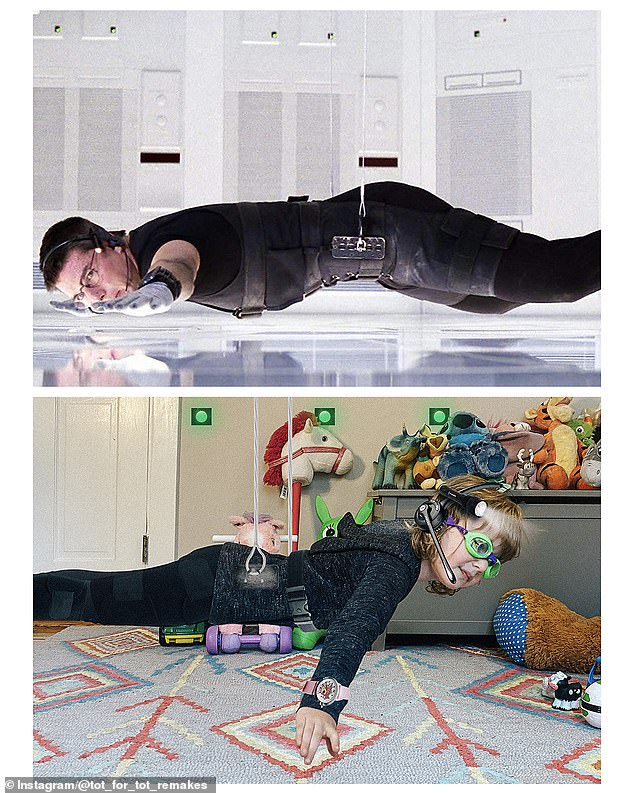 Mission Impossible: Dangling from a wire above the floor is no easy feat, but Matilda makes Tom Cruise’s stunt look easy 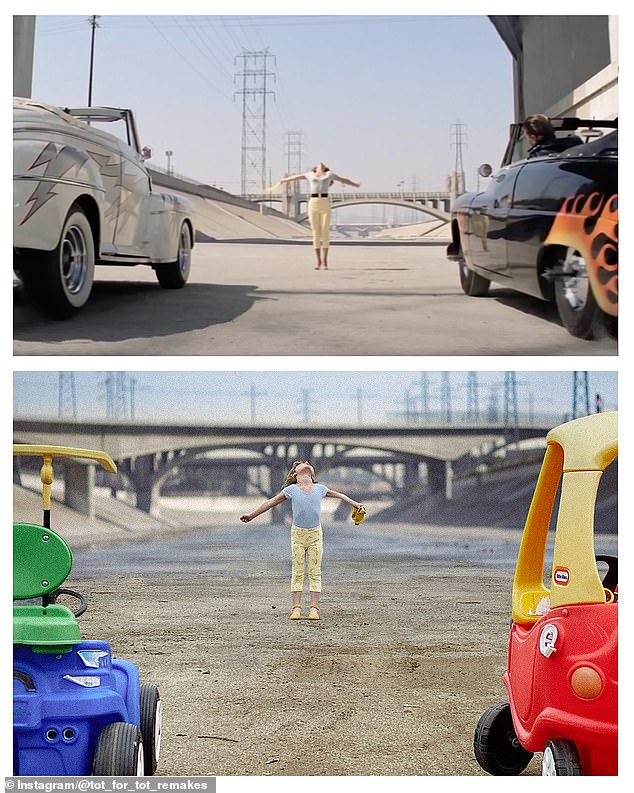 Grease: Matilda deserves an Oscar for her recreation of the dramatic signal to start the race at the climax of Grease