A newly sworn-in West Virginia delegate, the CEO of a Chicago data analytics company and a man sentenced to eight years for attempted murder are among 14 people federally charged so far following Wednesday’s riots at the Capitol.

They also include a handyman whose daughter claimed had been ‘radicalized’ and a white supremacist who broke into Nancy Pelosi’s office to sit at her desk.

Richard Barnett, 60, was pictured putting his feet up on her desk.

Barnett, who proudly referred to himself as a white nationalist on social media, was charged with unlawful entry. He was taken into custody at his home in Little Rock, Arkansas. It’s unclear where he now is or if he’ll be extradited but he is in custody.

Among them was also Michael Curzio, of Summerfield, Florida, who spent eight years in prison for attempted murder.

Curzio was released in February 2019.

Of the 13 – 11 men, two women – ten are charged with entering a restricted public building and violent entry and disorderly conduct on Capitol grounds.

The 13 included a Chicago CEO, Brad Rukstales, who issued a groveling apology for his ‘extremely poor judgement’ in joining in the chaos.

He said it was the ‘single worst decision of my life’.

Brad Rukstales, a CEO, has been federally charged for storming the Capitol on Wednesday 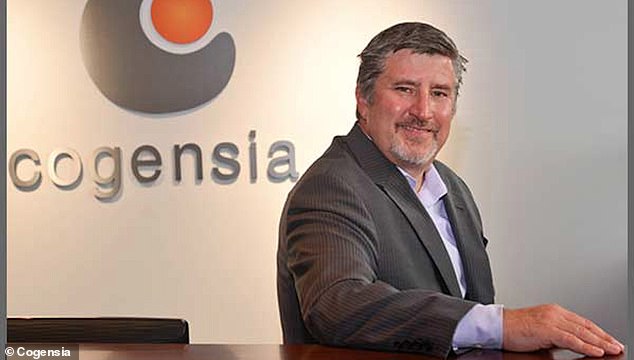 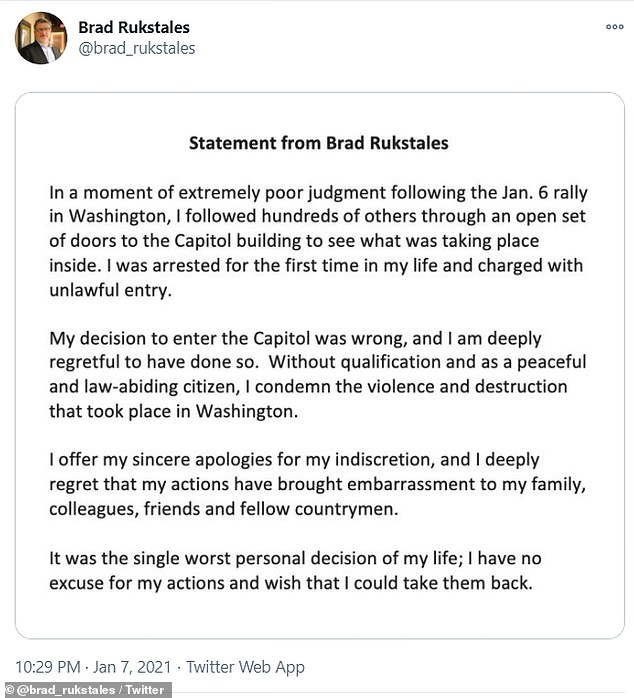 Douglas Sweet from Hudgins, Virginia, was held in jail for eight hours and then released.

He told WKTR he traveled to Washington because ‘Trump asked all the patriots to show up, so I did.’

He said: ‘I didn’t go with any malice or intention of malice of those that committed those the fights – the tear gas and just, you know, throwing stuff at police.

‘That wasn’t in my game plan at all.’

Asked if he has any regret, being involved in a riot where four people died, Sweet said: ‘From our actions, come reaction.’

Robyn said that her father had disowned her because she fought against racism and bigotry while he had been ‘radicalized by conspiracy underground websites and groups.’

‘I am completely ashamed and disgusted of him,’ Robyn said of her father’s actions at the Capitol.

Those charged also include Cleveland Meredith, charged with making threats against Nancy Pelosi; Lonnie Coffman, of Alabama, charged with firearms and explosives offenses and Christopher Alberts, of Maryland, who is charged with carrying a firearm at the Capitol.

Evans, the politician, broadcast his participation in a Facebook Live video he took of himself as he entered the Capitol building during the riots, shouting: ‘We’re in! We’re in! Derrick Evans is in the Capitol!’ 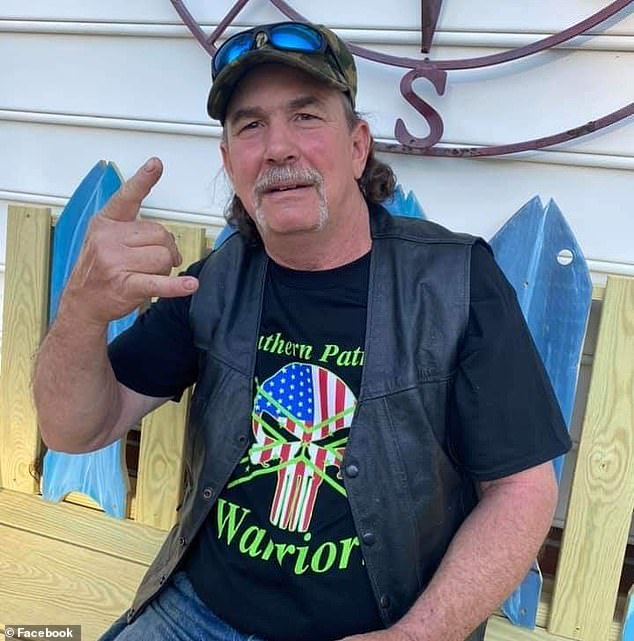 Douglas Sweet, asked if he regretted being there, replied: ‘From our actions, come reaction’ 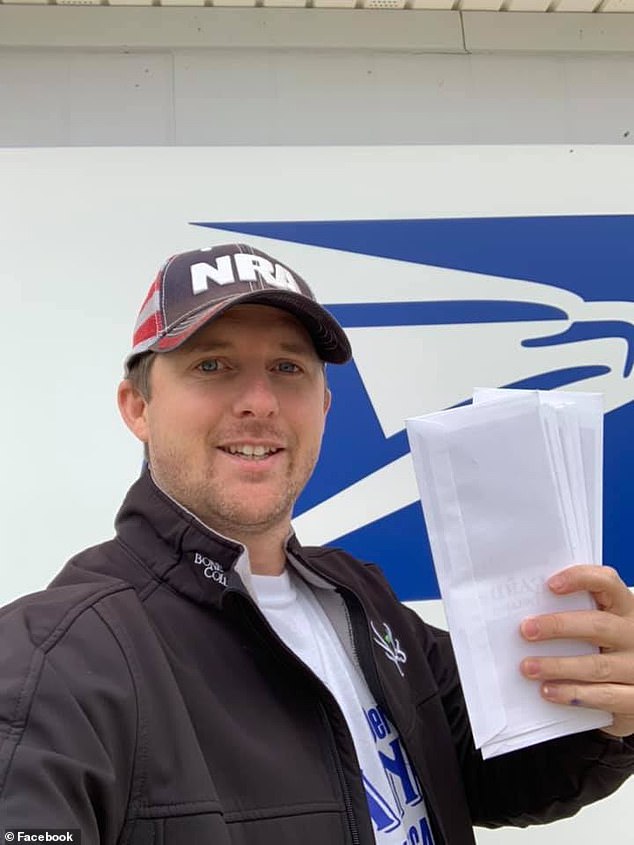 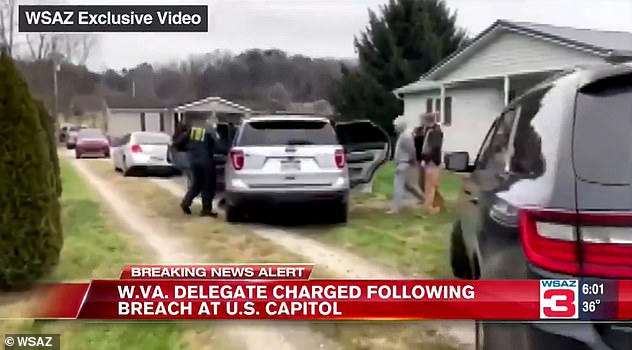 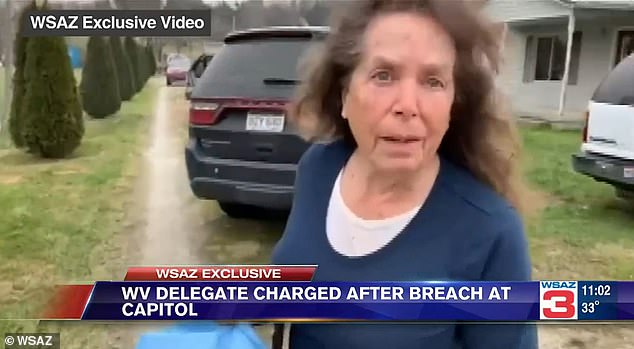 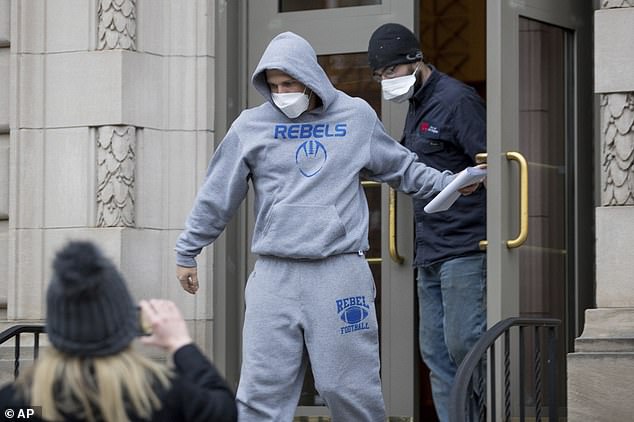 The affidavit, obtained by the news station, notes that during the live video, Evans can also be heard chanting to people in the doorway and the front of the of the crowd of rioters saying, ‘Move! Move! Move!’

FBI agents were spotted arriving at Evans home in Prichard, West Virginia, Friday afternoon and taking him into custody.

As Evans, wearing a Tolsia Rebels high school sweat suit, was escorted to a car and driven away by authorities, a woman emerged from the house and told WSAZ that she was his grandmother.

She said that ‘He’s a fine man,’ referring to Evans.

‘And thank you, Mr. Trump, for invoking a riot at the White House,’ she added.

Evans was taken to a federal courthouse in Huntington, West Virginia, for a hearing Friday and released on a personal recognizance bond. Evans is charged in U.S. District Court for the District of Columbia, WV Metro News reported.

The federal affidavit against Evans noted that prior to Wednesday’s riots, Evans had a meme stating: ‘A storm is coming, and there is nothing the left can do to stop it!’ on his Facebook page on New Year’s Eve.

In the video, the affidavit noted, Evans could be heard telling other riots not to vandalize anything, WSAZ reported.

On Wednesday, after the riot, Evans posted a statement on his Facebook page which read: ‘I want to assure you all that I did not have any negative interactions with law enforcement, nor did I participate in any destruction that may have occurred.’

West Virginia Gov. Jim Justice has said that Evans should resign from his delegate position.

Evans’ lawyer has said that Evans will not do that in a statement on Thursday.

The charge of entering a restricted government building is a misdemeanor offense, which could lead to fines. The penalty could increase, however, ‘the offense results in significant bodily harm,’ according to WV Metro News.

The second charge against Evans is also a misdemeanor and could result in six months of jail time if he’s convicted. 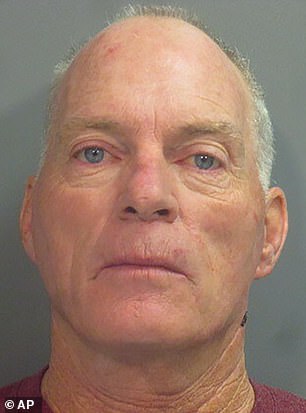 Richard Barnett, 60, has been charged with unlawful entry

The DoJ announced on a call with reporters on Friday afternoon that 13 people had been charged including Barnett, who had also left a threatening note on Pelosi’s desk Wednesday.

Coffman has also been arrested after police found his red GMC pick-up truck near the RNC – where a pipe bomb was left. He has not been charged over the pipe bomb but cops found two handguns, 11 Molotov cocktails and an M4 carbine assault rifle in his vehicle.

He has been charged with possession an unregistered firearm (destructive device) and carrying a pistol without a license. 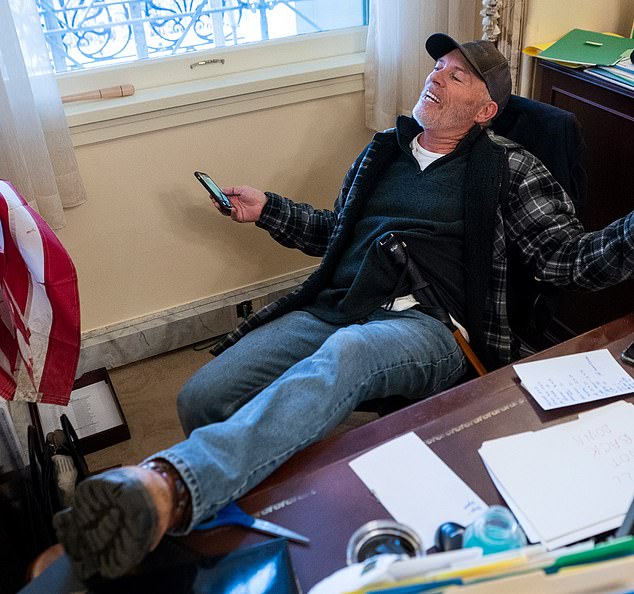 The MAGA rioter who put his feet up on Nancy Pelosi ‘s desk was arrested along with a man who brought 11 Molotov cocktails, two handguns and an assault rifle to the Capitol on Wednesday

More than 80 people have been arrested in total and 55 are being pursued on federal charges, officials said on the call.

THE RIOTERS AND THEIR FEDERAL CHARGES

Lonnie Coffman – possession of an unregistered firearm and carrying without a license. He had 11 Molotov cocktails in his truck.

Dozens more remain free and the FBI is scrambling to catch them with public appeals for help and rewards for information after Wednesday’s disastrous attempts by law enforcement to control the crowd.

Their failure to arrest the rioters – many of whom had guns and overpowered them – has outraged millions of Americans who compared the soft touch to the harsh crackdown by police on BLM protesters during the summer.

The cops found Coffman’s vehicle and searched it after securing a perimeter in the area surrounding the DNC and RNC, where two pipe bombs had been left.

The bomb squad had been called in to help with that.

It was during a sweep of the area that they found Coffman’s van.

‘One black handgun was recovered from the right front passenger seat of the vehicle.

‘After locating the black handgun, officers proceeded to search the rest of the pickup truck, including the bed of the truck, which was secured under a fabric top.

‘During the search of the cab of the truck, officers recovered, among other things, one M4 Carbine assault rifle along with rifle magazines loaded with ammunition,’ the affidavit supporting his arrest says.

Coffman was arrested after approaching cops in a female friend’s car, asking if he could access his vehicle again.

He asked them: ‘Did find the bombs?’ which the cops thought was a reference to the materials in his car but he says was in reference to those left outside the DNC and RNC.

The cop who Leffingwell is accused of punching signed his arrest affidavit.

In it, he describes how he attacked him in the Capitol building.

‘In the course of this effort and while inside the Capitol building, I encountered an adult male who later identified himself to me as Mark Jefferson Leffingwell.

‘Leffingwell attempted to push past me and other officers.

‘When he was deterred from advancing further into the building, Leffingwell punched me repeatedly with a closed fist. 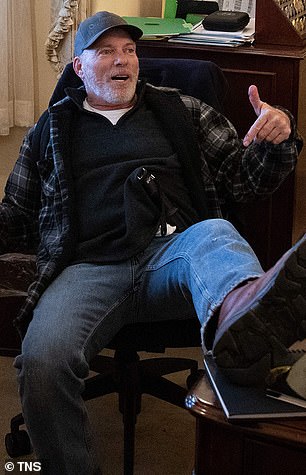 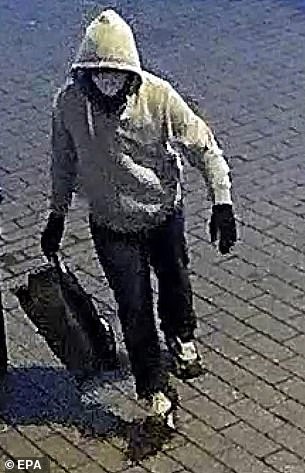 The DoJ announced on a call with reporters on Friday afternoon that 13 people had been charged including Richard Barnett, 60

‘I was struck in the helmet that I was wearing and in the chest.

‘Working with other officers, I was able to gain control over Leffingwell, who attempted to struggle while being detained.

Another cop described seeing a ‘bulge’ in Christopher Alberts’ pocket which he recognized to be a handgun at 7.25pm, more than an hour after the curfew had been put in place.

‘While pushing Alberts towards the line, I tapped the bulge with my baton and felt a hard object that I immediately recognized to be a firearm. At the time, Alberts was also wearing a bullet-proof vest and carrying a backpack,’ officer Dallan Haynes wrote.

Pruitt was among a group of people who refused to leave the Capitol after the 6pm curfew. Council was among the group that pushed a barricade down to get into the building.

Cindy Fitchett, Terry Brown, and Thomas Gallagher are also charged in the same complaint for refusing to leave.

No one has been arrested yet in connection with the death of Capitol cop Brian Sicknick, 42, who died in the hospital after being hit, allegedly in the head, with a fire extinguisher.

‘This is an ongoing investigation we’re working this with our partners to ascertain what happened in that situation.

‘We are 100 percent on it and are getting to those answers,’ FBI Washington Field Office ADIC Steven D’antuono said.

Sicknick was himself a Trump fan who posted on social media about his support of the President.

A transportation worker from New York who called out sick in order to take part in the mob has been suspended from his job with MTA Metro-North. 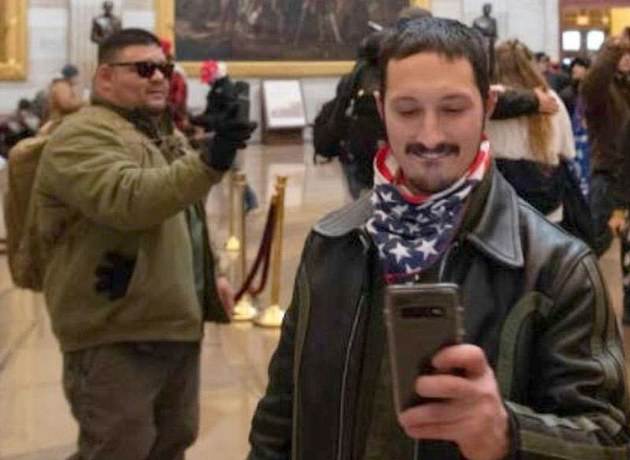 Metro North employee Will Pepe, 31, was recognized by both colleagues and management from a photo distributed by law enforcement. He has since been suspended from the MTA

Will Pepe who worked at Metro-North’s Brewster rail yard in upstate New York is now being investigated by the FBI who are looking into what role he played during the rally.

Pepe, 31, from Beacon, New York, had been with the MTA for seven years earning $74,000-a-year but decided to call out sick to head to the event which in itself is a ‘false use of sick leave’.

He has now been suspended as the agency looks to fire him in the coming days.