In September 2015, the Obama-Biden administration approved the sale of a strategically sensitive Michigan manufacturer, Henniges Automotive, to a firm connected to Joe Biden’s son, Hunter, and a Chinese military contractor that was on an American watch list because of its close ties to the People’s Liberation Army. Hunter Biden’s equity fund, backed by the Communist Chinese government, and the Chinese contractor, Aviation Industry Corporation (AVIC), needed special approval for the deal from the Committee of Foreign Investment in the U.S. (CIFIUS) because Henniges produced technology with potential military use.

AVIC entities have been sanctioned by the United States on five separate occasions since 1993 and the addition to the watch list–a major red flag—occurred less than a year-and-a-half before they co-purchased Henniges with Hunter Biden’s BHR. The fact that CFIUS approved the deal is alarming given that Henniges owns numerous facilities in the United States that are now controlled by a Chinese military front company.

Internal BHR documents show exactly how the Chinese military contractor was able to disguise its ownership via shell corporations and formed a joint-venture with the son of the vice president to facilitate the Chinese takeover of an American dual-use technology supplier. Additional documents suggest that Hunter Biden’s Chinese-backed venture funneled money to an entity controlled by Vanessa Kerry, the daughter of then-Secretary of State John Kerry, just one month before CFIUS approved the takeover. At the time, Secretary Kerry played a lead role on the Obama-Biden CFIUS committee.

When news of the AVIC takeover of Michigan-based manufacturer Henniges Automotive hit the wire, Biden’s associates celebrated, calling the transaction a “proof of concept” for future Chinese acquisitions. “Congratulations!!!! Proof of concept again,” read the subject line of Devon Archer’s email on September 15, 2015. “This is great. Let’s get a letter out to Ambassador Baucus ASAP Archie (an apparent Archer nickname),” Bevan Cooney replied. Cooney is a former Biden associate who is now incarcerated for a separate venture—the tribal bond scheme—involving Biden’s business partners. [Should we explain that “Archie” is Devon Archer?] Cooney has provided investigative journalists Peter Schweizer and Matthew Tyrmand with access to his emails with written authorization. 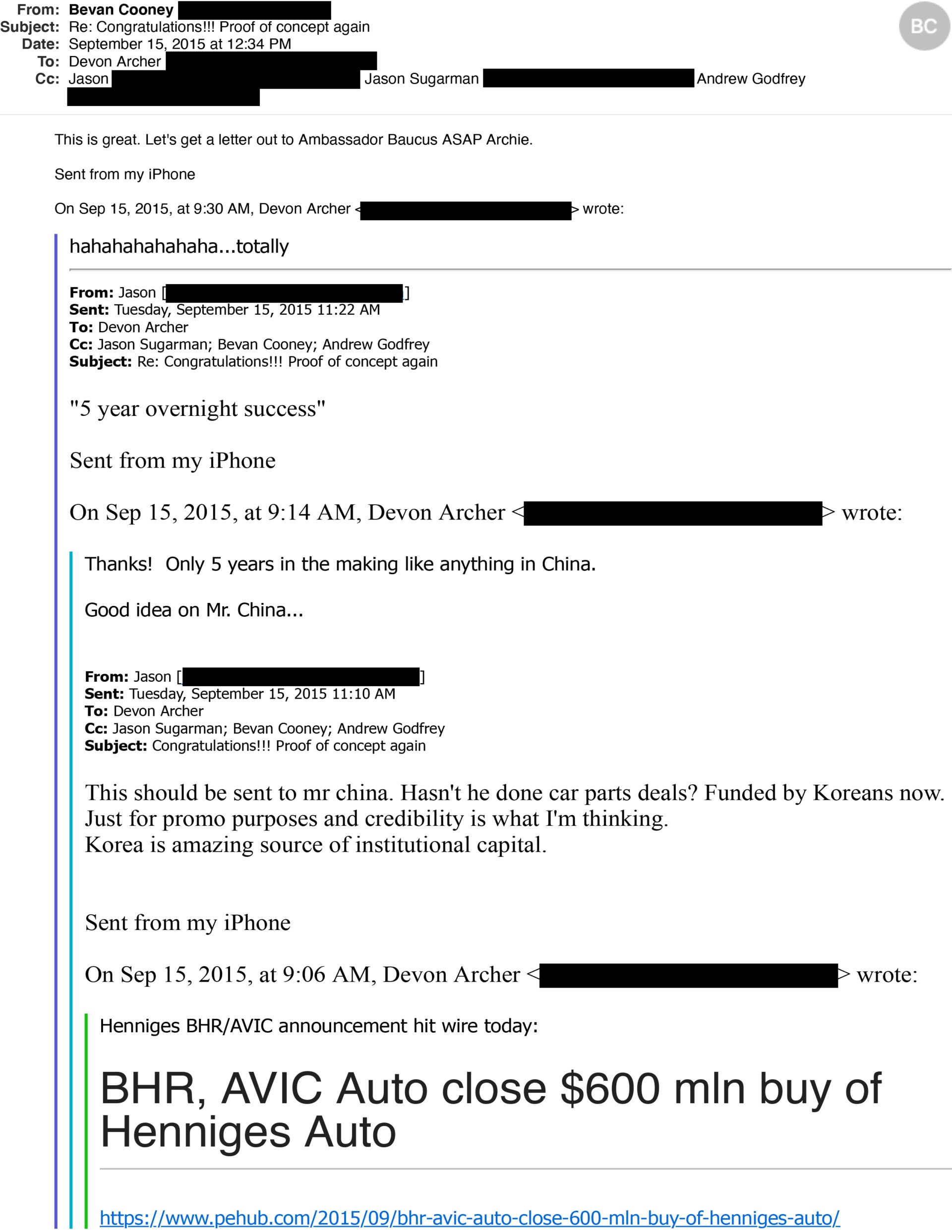 Moments after the deal closed, Archer set to work drafting a letter to U.S. Ambassador to China Max Baucus (who happened to be a longtime friend of the Biden family). Archer’s letter was an invitation to Ambassador Baucus to attend a banquet celebration for the deal with esteemed guest including BHR’s communist state-owned “strategic partners” and investors:

I am writing to invite you to a cross-border banquet to celebrate our acquisition of Henniges Automotive. We consummated the transaction earlier this month, in conjunction with our strategic partner, AVIC, for $600 million. I have also attached a news article about the transaction.

This milestone marks our first U.S.-based acquisition. Our strategic partners, including AVIC and Sinopec, will be in attendance, as will our investors, including the Bank of China and China Development Bank. We hope to discuss the opportunities and challenges of cross-border investments for Chinese companies in today’s macro environment. A member of our team has also extended an invitation to your economics advisor – Jonathan Fritz – to speak at the seminar. 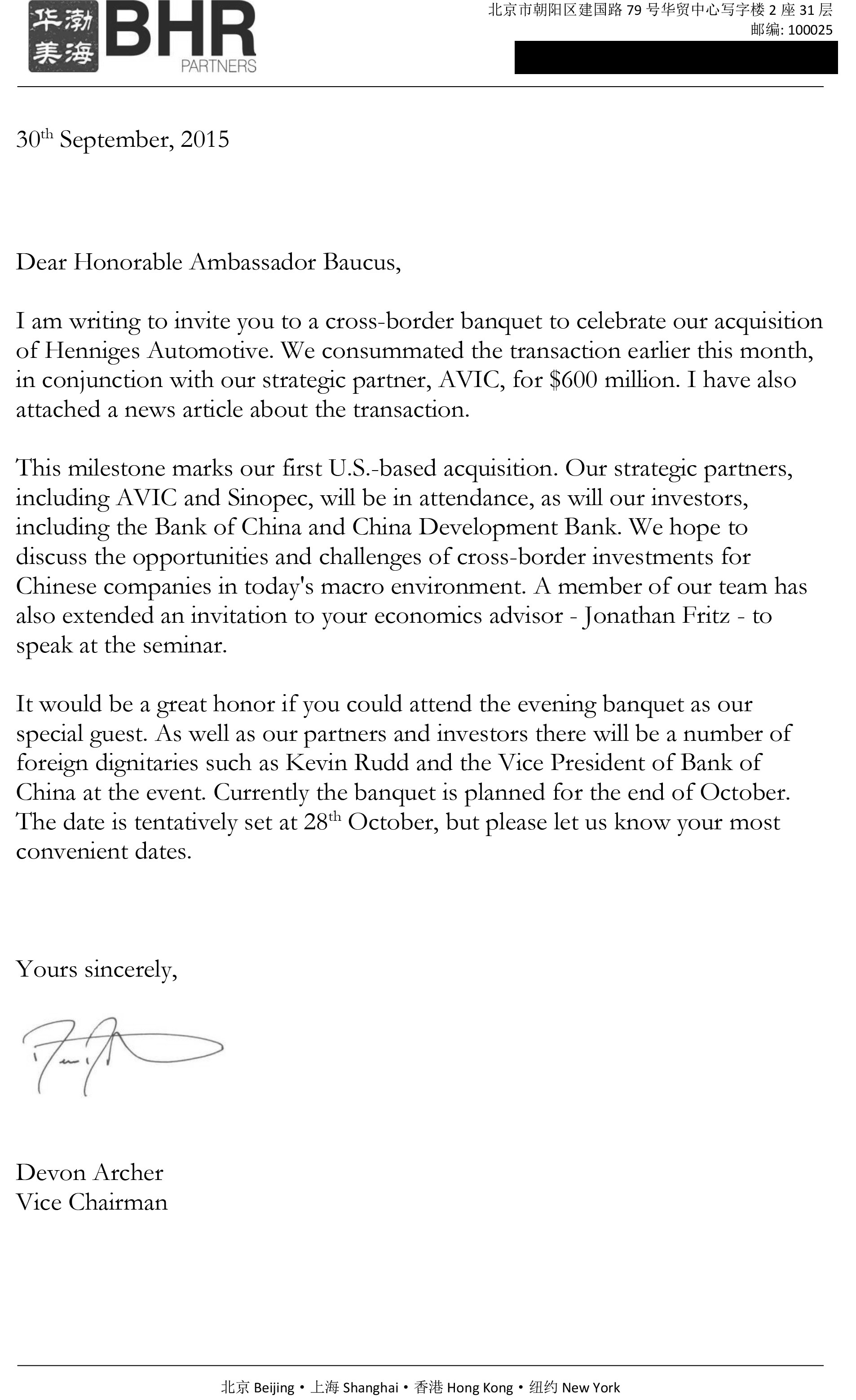 The strategic partners and investors that Archer listed—particularly Sinopec, the Bank of China, and the China Development Bank—are all State-owned entities and therefore arms of the Chinese Communist Party whose executives/officials, along with BHR, clearly wanted to celebrate the Henniges coup.

Indeed, Hunter Biden’s Chinese business partner were pleased. One internal BHR document states in both English and Mandarin Chinese: “We are incredibly proud of the perseverance, dedication and ingenuity of the Project Hanson team who collectively brought to life the first-born of BHR’s cross-border investment platform, the first of many to come.”

Roger Robinson, a former senior director for international economic affairs on President Ronald Reagan’s National Security Council, claims that “the U.S. government has known for years that AVIC has been helping China’s military and aiding U.S. enemies and as such was sanctioned in the past.” AVIC’s well-known and long-established ties to the Chinese military-industrial complex makes the Obama-Biden administration’s approval “all the more curious.” “This is anything but a benign Chinese enterprise,” said Robinson.

But BHR and AVIC’s Project Hanson helped obfuscate and ameliorate the AVIC connections by creating a complex ownership structure. One internal BHR document reveals precisely how the Chinese military front company was able to disguise its true ownership in a byzantine off-shore structure, presumably obfuscating the fact that the Chinese military was taking over U.S. company whose technology is on the restricted Commerce Control List (“Target” refers to U.S. military supplier Henniges Automotive):

Another internal BHR document contains a shocking revelation: Devon Archer facilitated Chinese “support” for an entity called Seed Global Health. Seed Global Health was co-founded and controlled by the daughter of Secretary John Kerry. According to BHR’s December 2015 internal document: “A special shout out to our director and shareholder, Devon Archer, for his involvement with the Seed Global Health non-profit foundation, which works to send medical staff and resources globally to countries in need. BHR will continue to support this and other worthy causes.”

It appears that BHR is referring to a fundraiser hosted by Devon Archer for Secretary Kerry’s daughter and her Seed Global Health organization that occurred on August 16, 2015—less than one month before Kerry’s State Department and the rest of the Obama-Biden CFIUS agencies approved Henniges takeover.  The politically connected Seed Global Health has previously come under fire for receiving more than $9 million in State Department funds without bids or competition and, in 2018, an executive at Seed Global Health was charged by federal prosecutors for violating federal conflict of interest laws and illegal lobbying.

This is a developing story.

Peter Schweizer is the author of Profiles in Corruption: Abuse of Power by America’s Progressive Elite. Seamus Bruner is the author of Fallout: Nuclear Bribes, Russian Spies, and the Washington Lies that Enriched the Clinton and Biden Dynasties.