Macy’s has unveiled its iconic holiday windows at its flagship New York City store, revealing a tribute to the Big Apple’s frontline workers and a thank you to the ‘true grit’ of New Yorkers who stayed in the city throughout the pandemic.

Just days after the windows were boarded up at the Herald Square location over fears of violence and looting on election night, the department store launched the 2020 display on Thursday, announcing the theme as ‘Give, Love, Believe’.

Featuring the message ‘thank you’ on neon signs in 16 different languages, a note on each window also honors healthcare workers, law enforcement and the Blacks Live Matter movement, and thanks them all for ‘your courage and your spirt which have lifted us all’.

‘To the New Yorkers who stayed when thousands did not,’ it adds, noting the exodus from the city, mainly in wealthy neighborhoods, as New York established itself as the global epicenter of the pandemic in March. 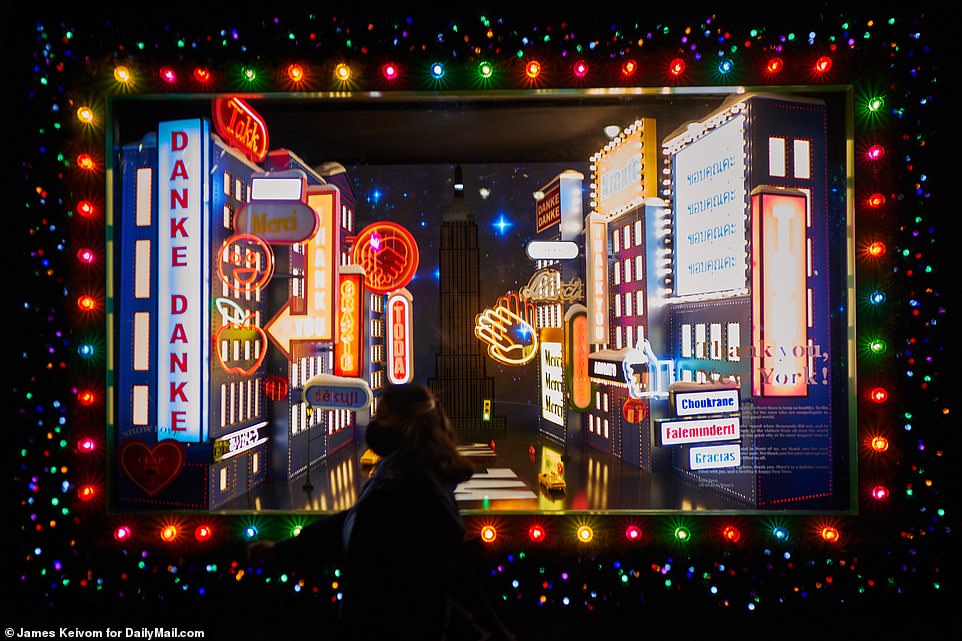 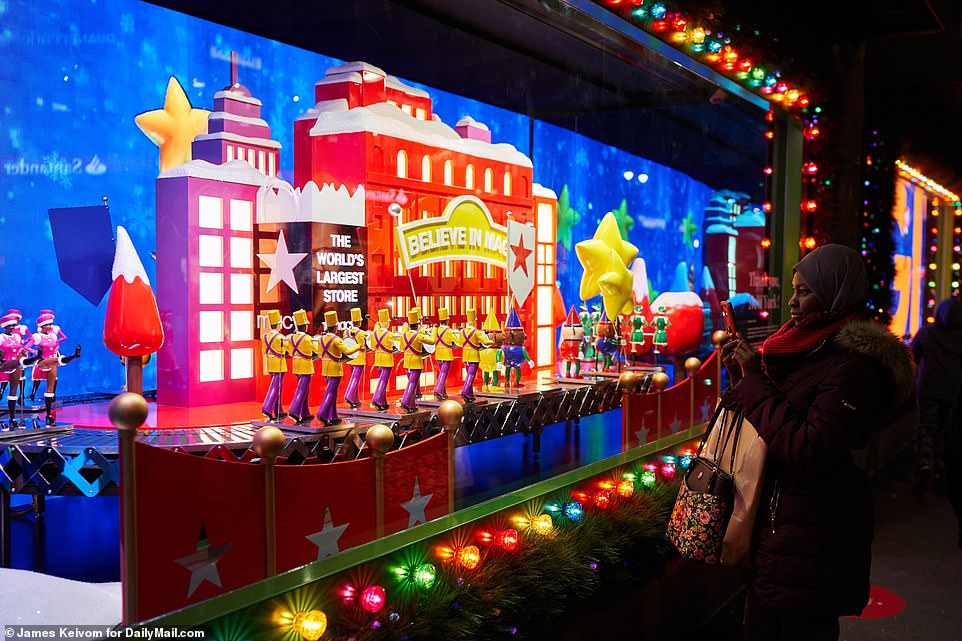 Tis the season: Across six animated window displays, the light show also welcomes back those who have since returned, as well as tourists who ‘are safely enjoying our great city at its most magical time of year’ 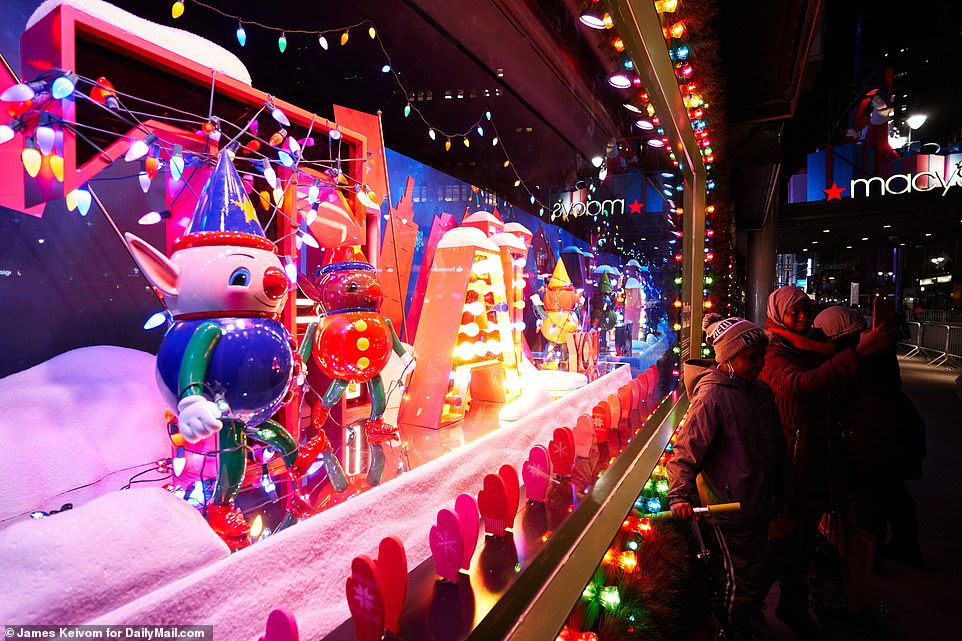 Time for a selfie: Visitors snap pictures in front of the holiday windows of the world famous department store 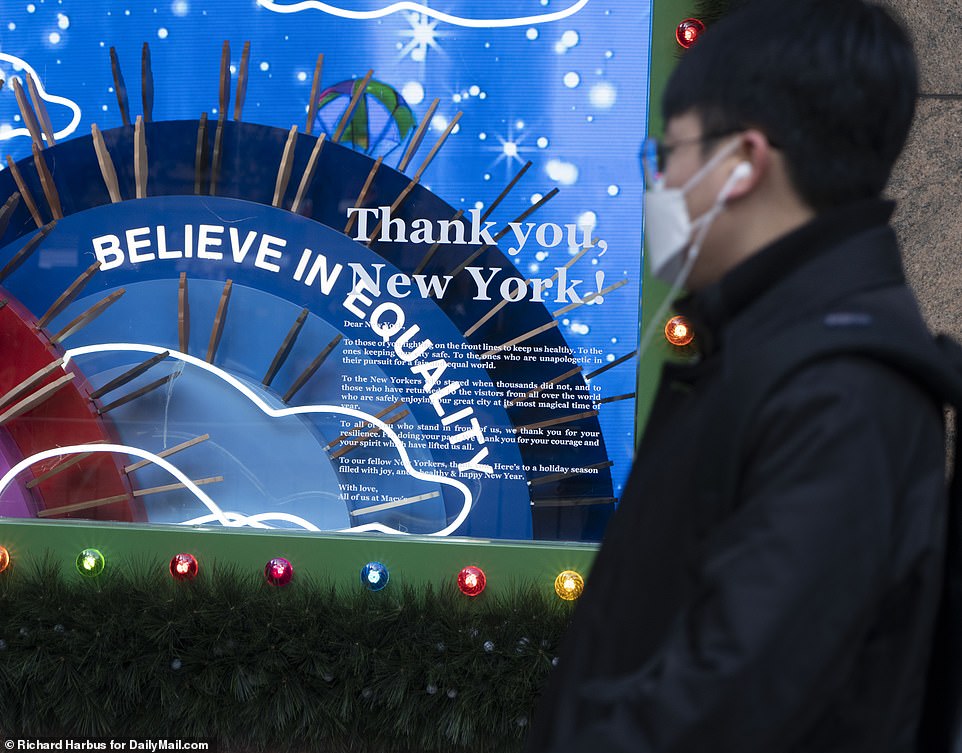 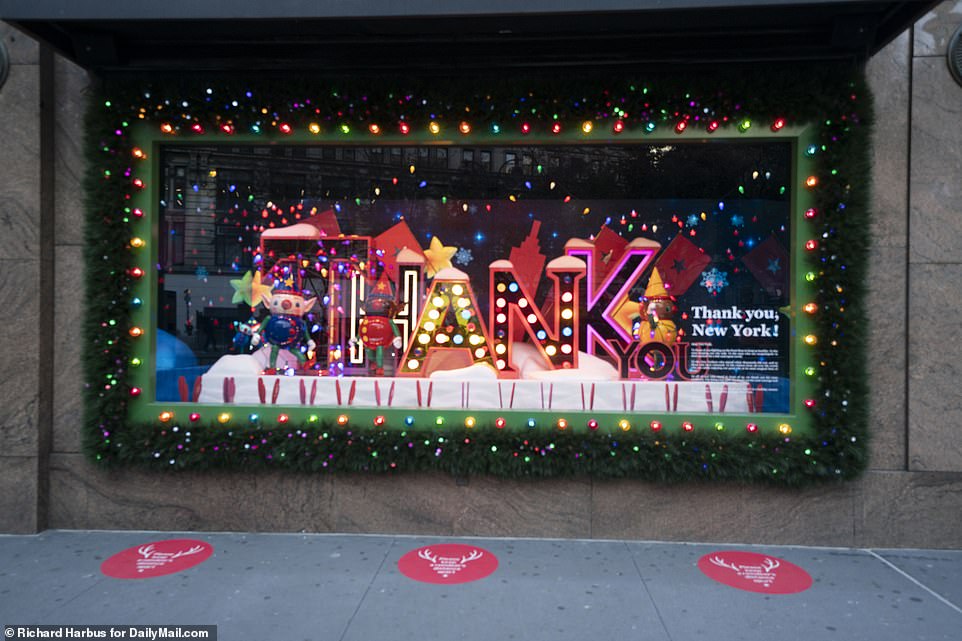 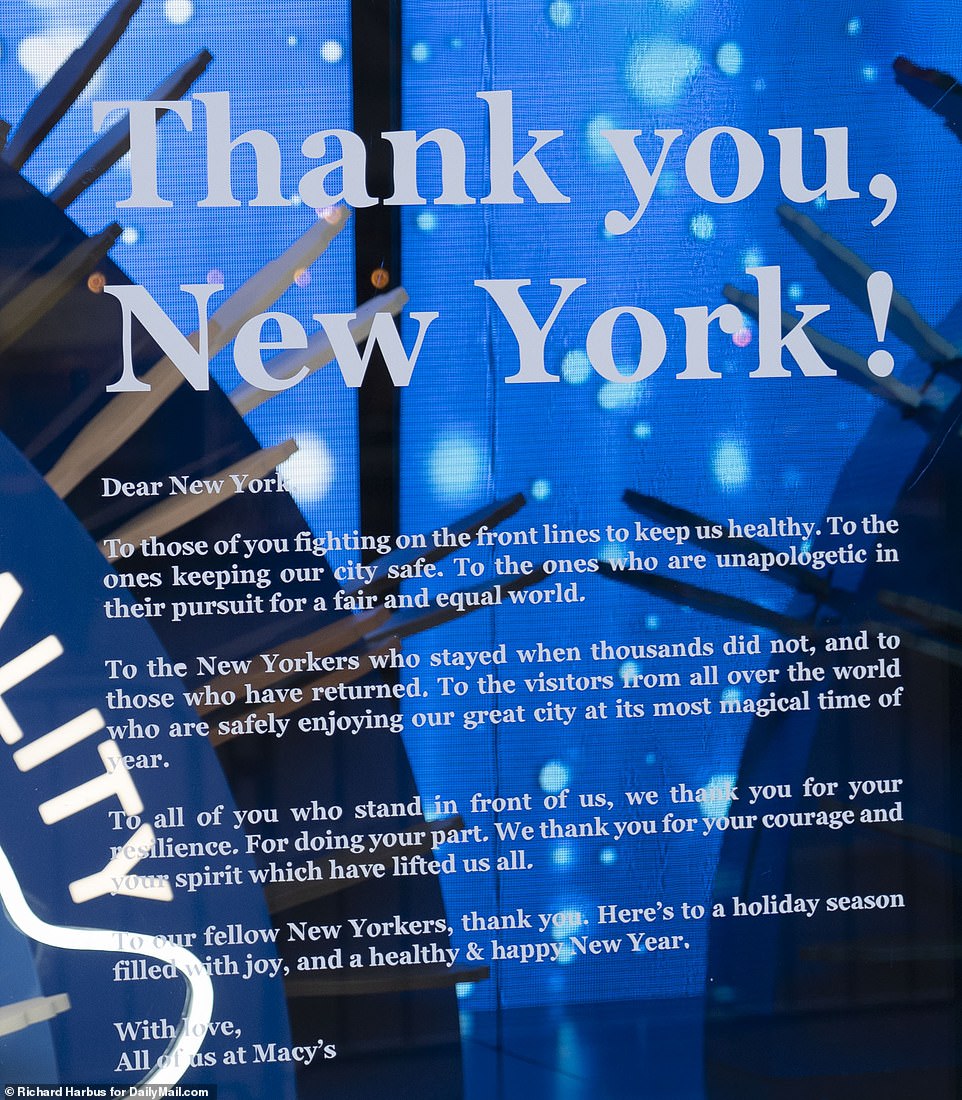 In a note on each window, the display honors healthcare workers, law enforcement and the Blacks Live Matter movement 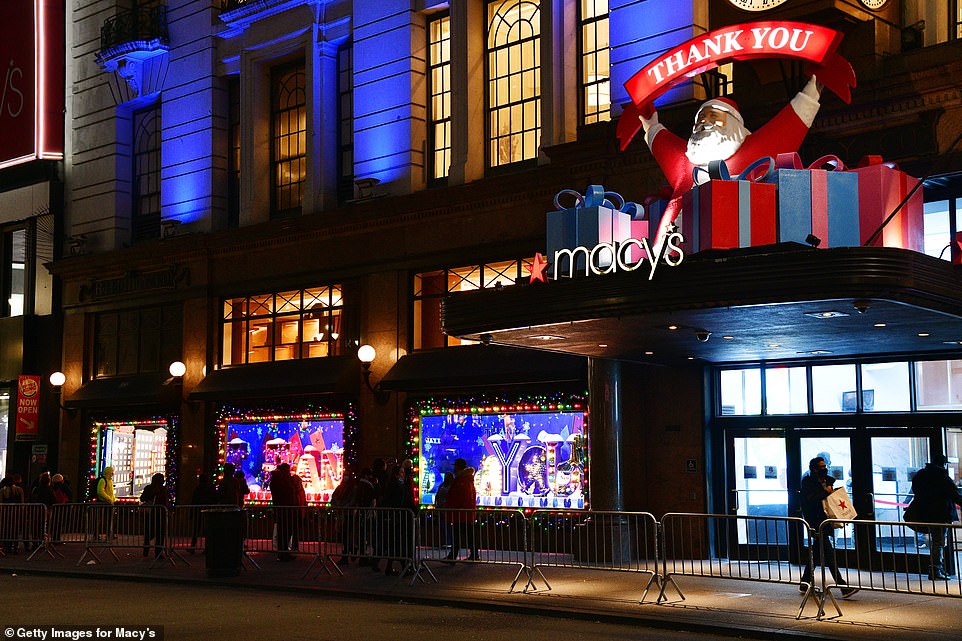 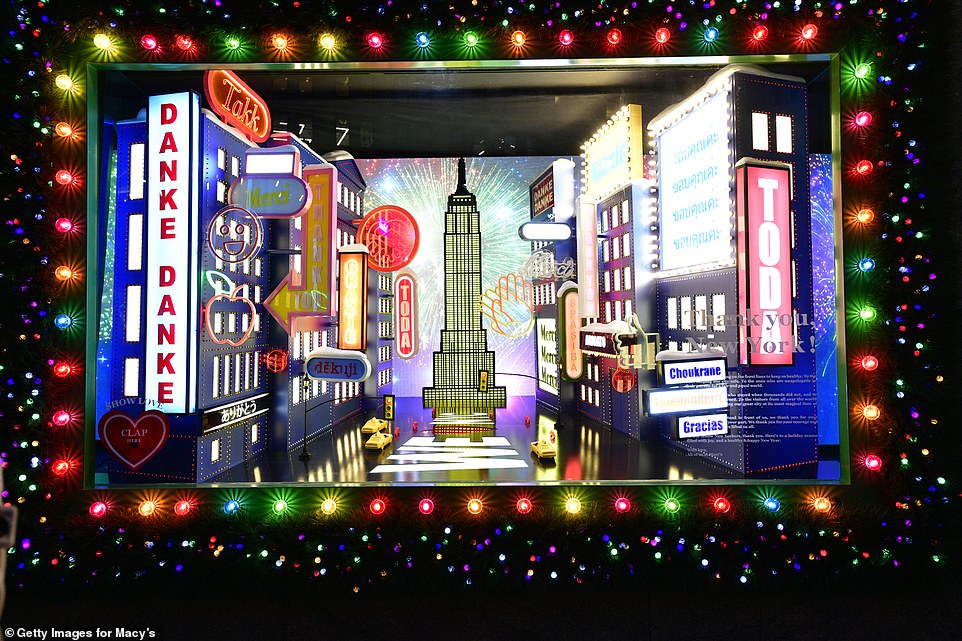 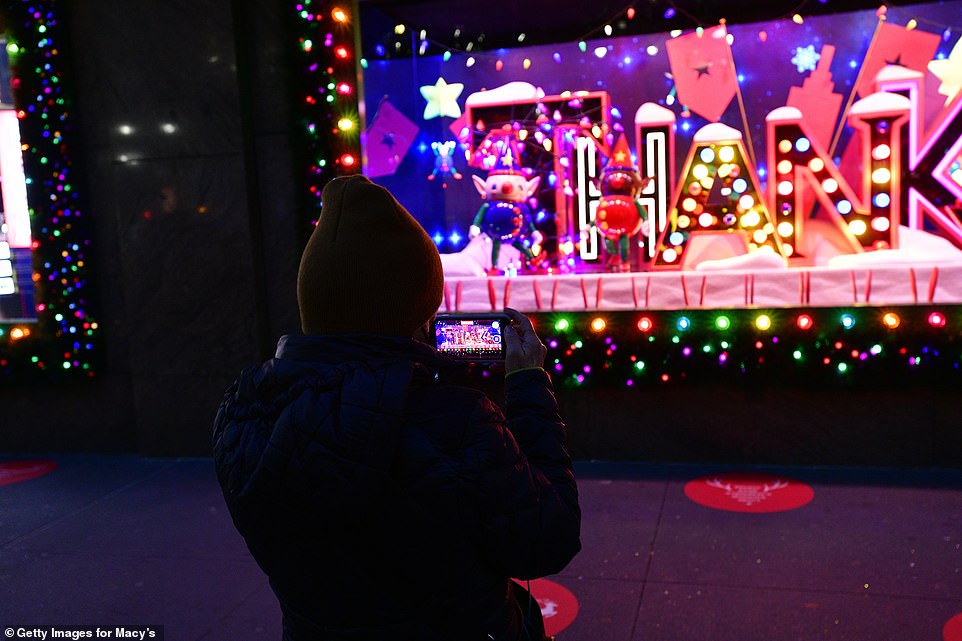 A view of the window display as Macy’s Herald Square unveils Give, Love, Believe 2020 Holiday Windows

Across six animated window displays, the light show also welcomes back those who have since returned, as well as tourists who ‘are safely enjoying our great city at its most magical time of year’.

‘It is a thank-you letter to all essential workers, New Yorkers, first responders, marchers for equality that showed their true grit in this very challenging year,’ said National Windows Director Manny Urquizo of this year’s display.

The retailer states that the windows also honor the diversity and uniqueness of New York.

‘Macy’s is part of the fabric of New York City. Our famed holiday windows this year reflect the power, grit and spirit of our resilient community,’ said Scott Devine, Macy’s Vice President of Visual Merchandising.

‘We want to thank first responders, essential workers and everyday New Yorkers who came together this year to support each other and the city we call home. With a dose of whimsy and a dash of sparkle, we hope our love letter serves to enchant, delight and honor our fellow New Yorkers as we celebrate the holidays.’ 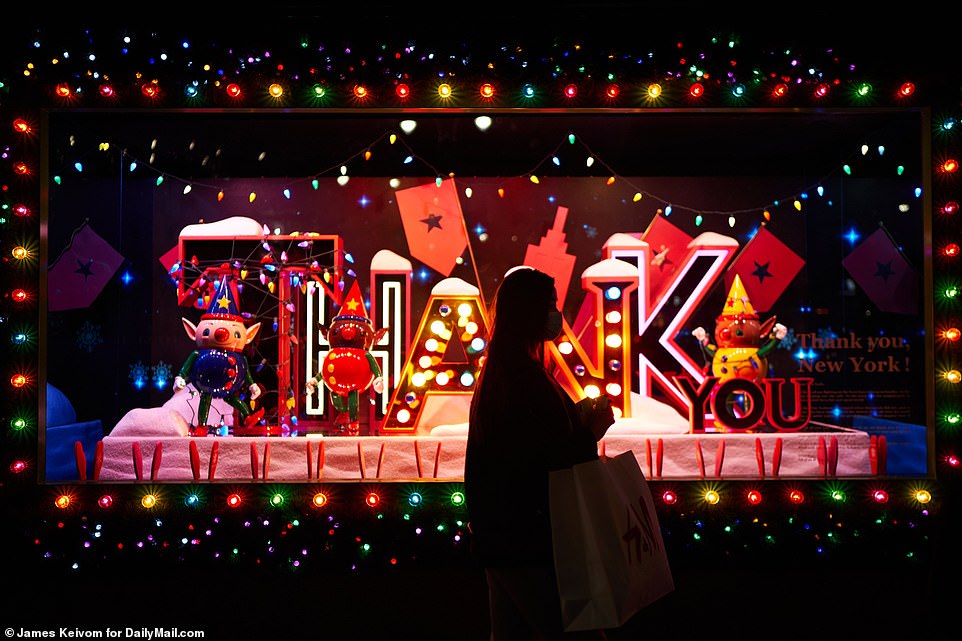 Across six animated window displays, the light show also welcomes back those who have since returned, as well as tourists who ‘are safely enjoying our great city at its most magical time of year’ 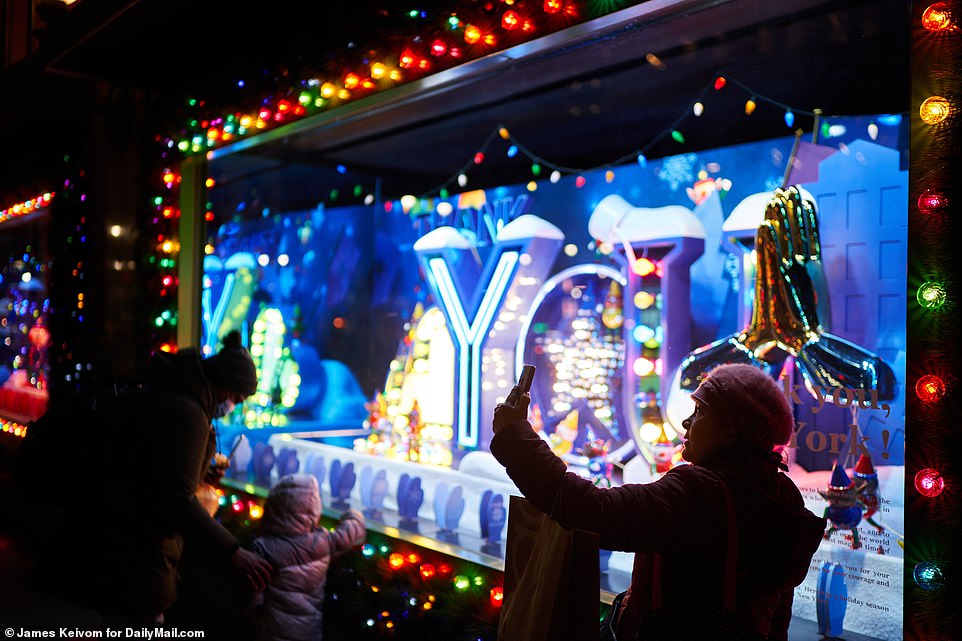 Picture perfect: Visitors flocked to take photos at the holiday lights in Manhattan 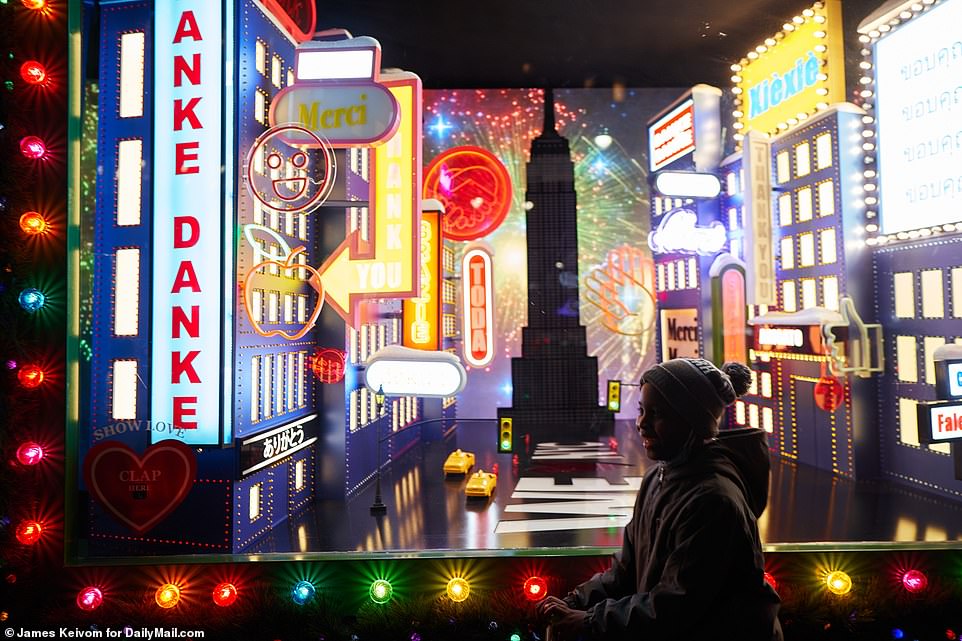 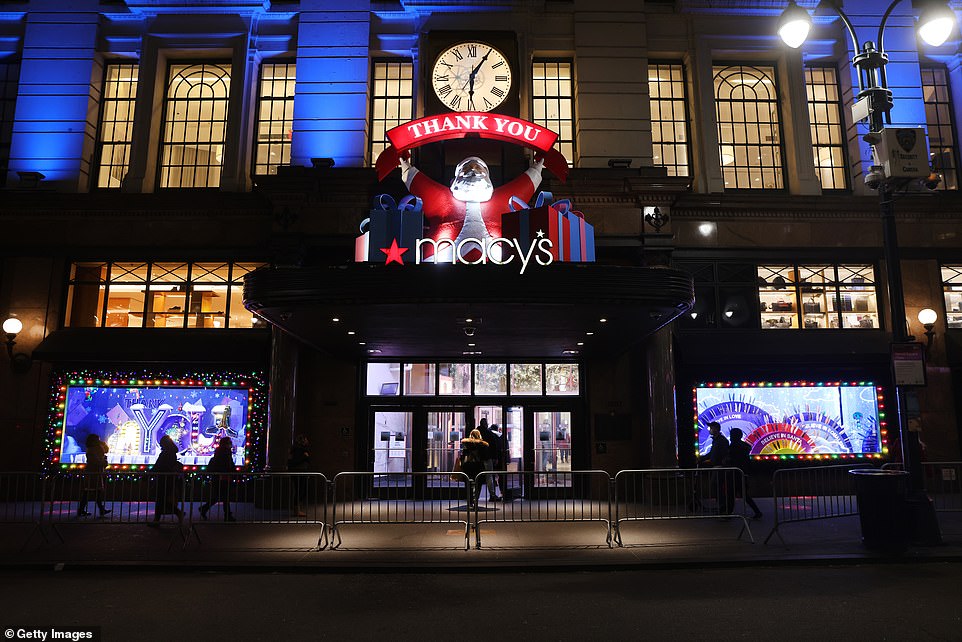 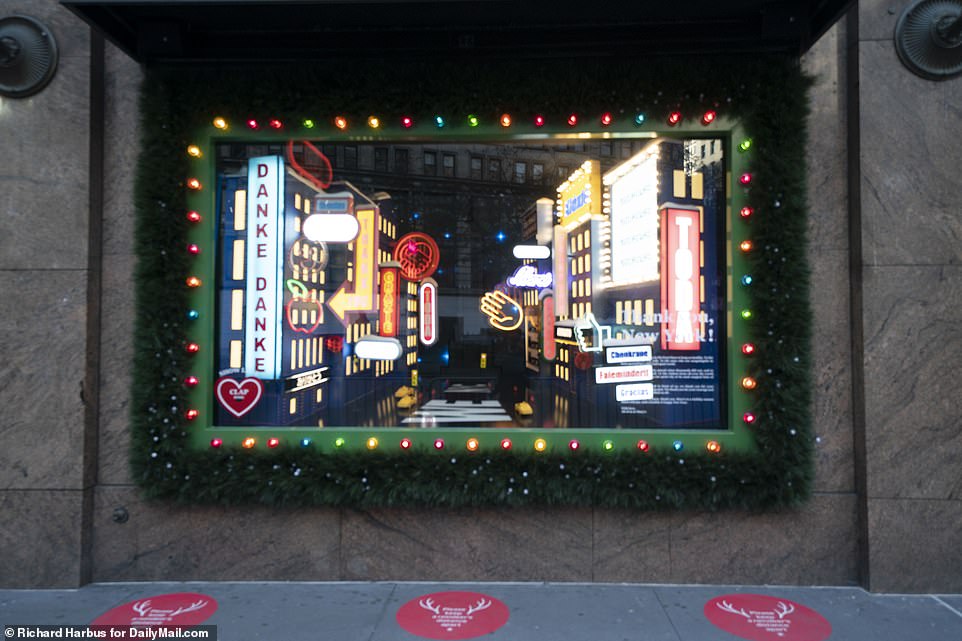 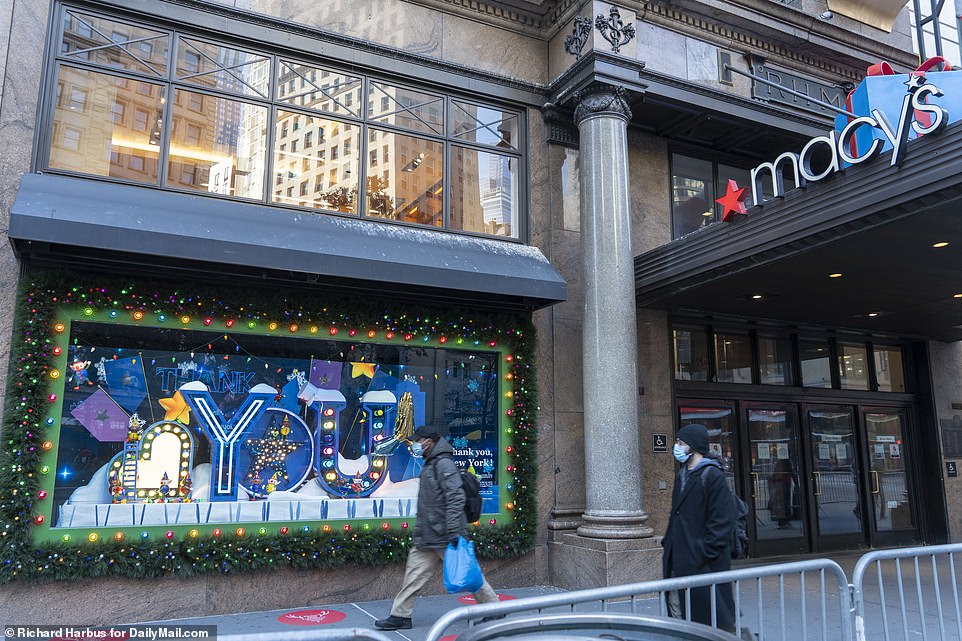 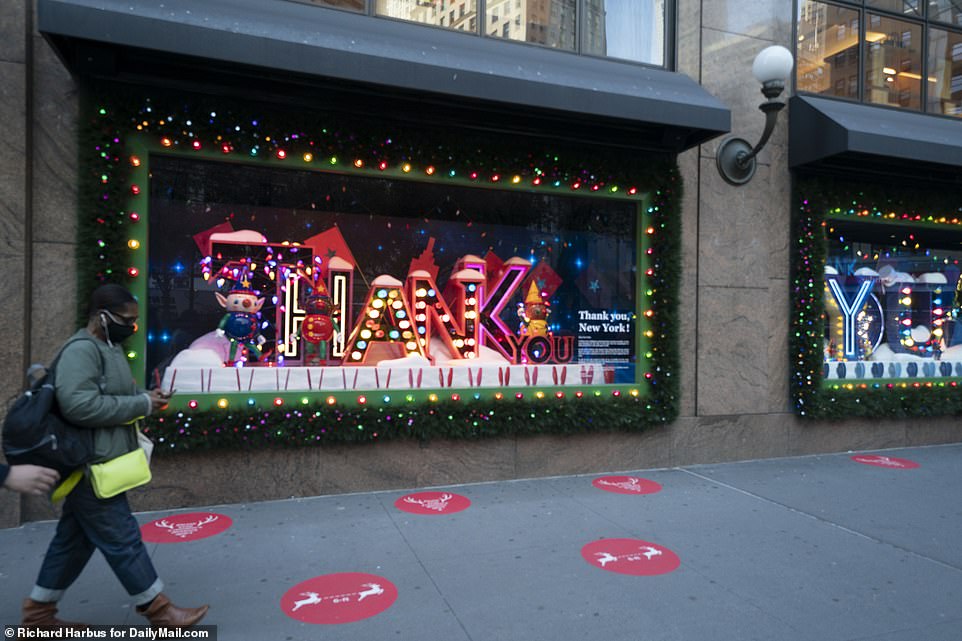 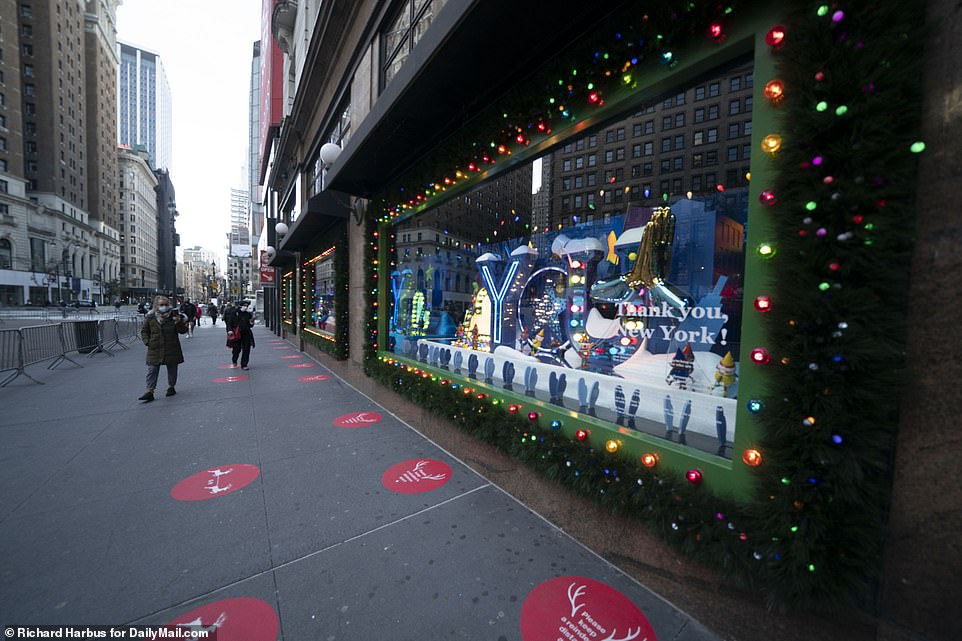 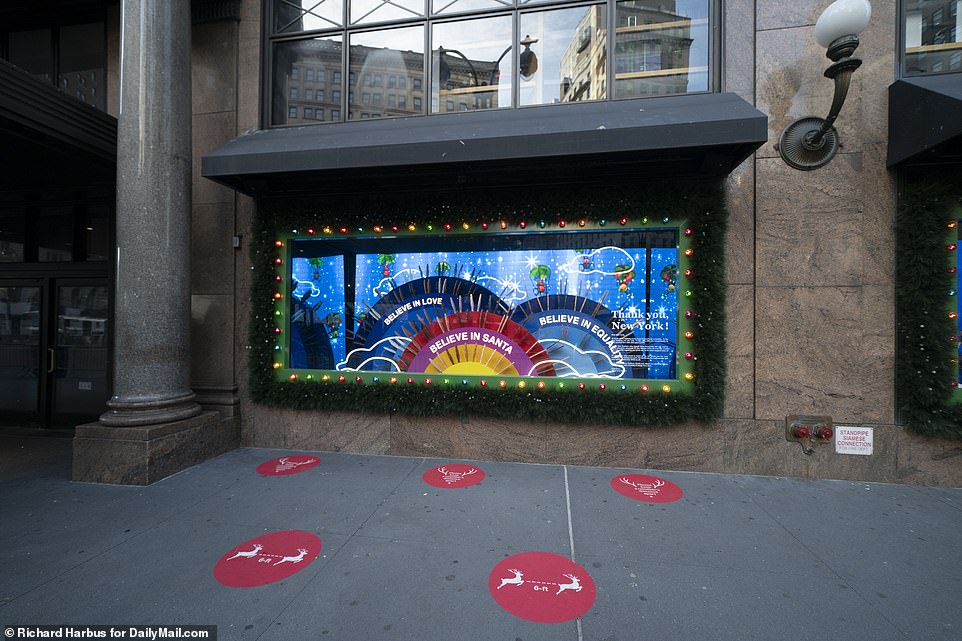 Window four, pictured, has the theme of unity, love, hope. The display needed one hundred workers to create 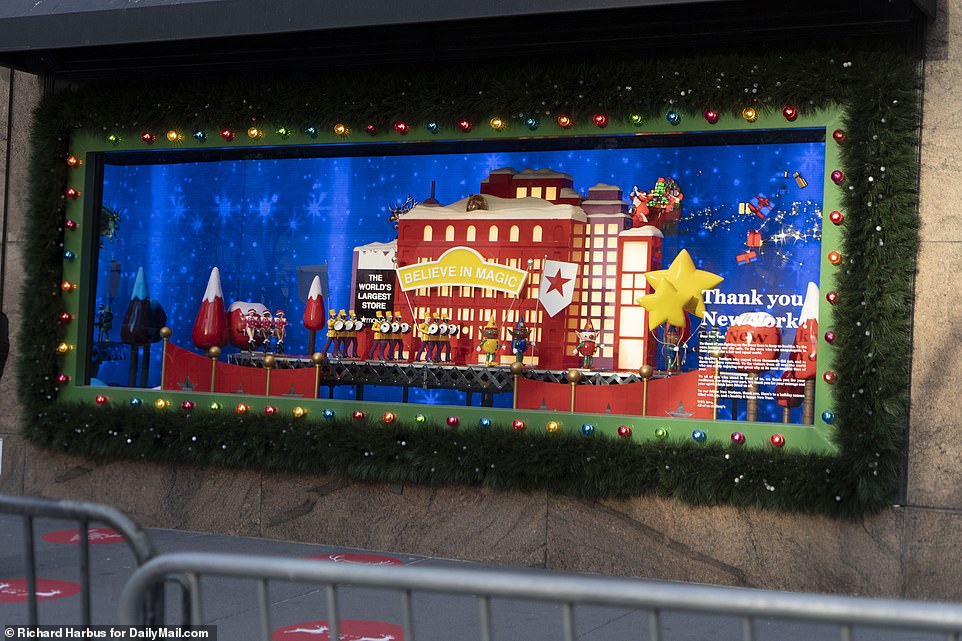 The fifth window features the Macy’s Thanksgiving Parade, which has had to be altered this year due to the pandemic 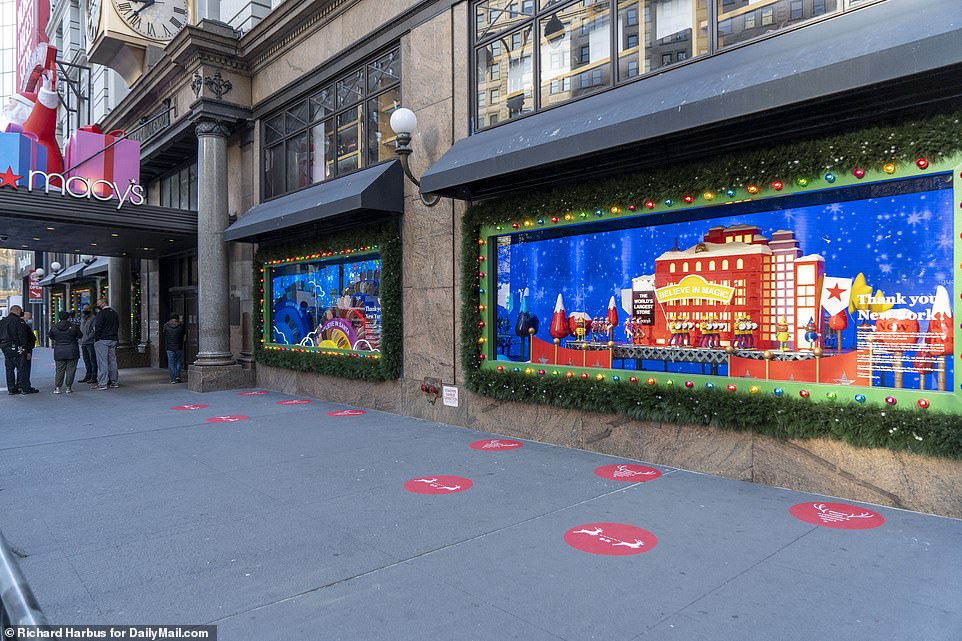 The first window of the light display features the Empire State Building as the centerpiece while the second and third windows shows two elves  scribbling ‘thank you’ across the city skyline. 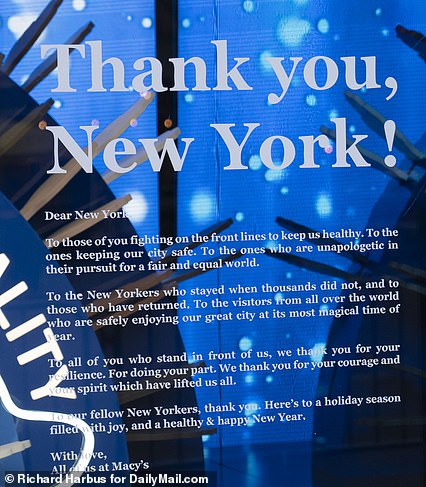 To those of you fighting on the front lines to keep use healthy. To the ones keeping our city safe. To the ones who are unapologetic in their pursuit for a fair and equal world.

To the New Yorkers who stayed when thousands did not, and to those who have returned. To the visitors from all over the world who are safely enjoying our great city at its most magical time of year.

To our fellow New Yorkers, thank you. Here’s to a holiday season filled with joy, and a happy and healthy New Year.

All of us at Macy’s

Window four has the theme of unity, love, hope, while the fifth features the Macy’s Thanksgiving Parade, which has had to be altered this year due to the pandemic.

In window six, visitors can spell out the words ‘thank you’ with their movements.

The department store chain was forced to modify is general holiday plans to accommodate for heightened health and safety restrictions required due to the coronavirus pandemic.

While the holiday window displays could continue, no in-person crowds will be watching the Macy’s Thanksgiving Day Parade next week, though preparations are underway to stage a modified version that will be broadcast on television.

And outside of Herald Square, floor markings have been installed to encourage those who come to view the holiday windows to maintain social distancing and to avoid the large crowds gathering as is generally seen each year.

The unveiling of this year’s display came after weeks in which the front windows of the store were boarded up over the potential threat of unrest on election night on November 3 and the protests and unrest following the death of George Floyd and Breonna Taylor.

This year’s light show marks an attempt by the department store to crawl back holiday business after midtown Manhattan descended into a ghost town as lockdowns hit and has failed to find its feet again.

On Thursday, Macy’s revealed that its comparable sales plummeted more than 20 percent in the last three months as coronavirus cases began to surge again.

While they recovered slightly once stores were able to open again in the summer, the retailer said it expects sales to remain about 20 percent down on 2019.

‘COVID is surging again across the country, and that continues to impede our recovery and international tourism and urban areas,’ Adrian Mitchell, Macy’s chief financial officer, said on a Thursday conference call with investors, according to the New York Post.

Yet they remained hopeful as Black Friday approaches.

‘Like all of 2020, we know unexpected challenges and opportunities will come our way and our team is prepared to tackle them,’ said CEO Jeff Gennette.

Footfall by the Macy’s window display is expected to be significantly lower this year as New York’s tourist industry struggles to recover with travel restrictions still in place and second lockdowns hitting international travelers.

NYC & Company, the city’s tourism promotion agency, say it is likely to be 2025 before the number of foreign visitors to the Big Apple reaches the 2019 heights – when a record 66.6 million visitors flooded the city, 13.5 million of which were international.

Pre-lockdown, up to 12 million people visited NYC in the first three months of the year; since then tourism has struggled to maintain any kind of momentum due to closures and restrictions. 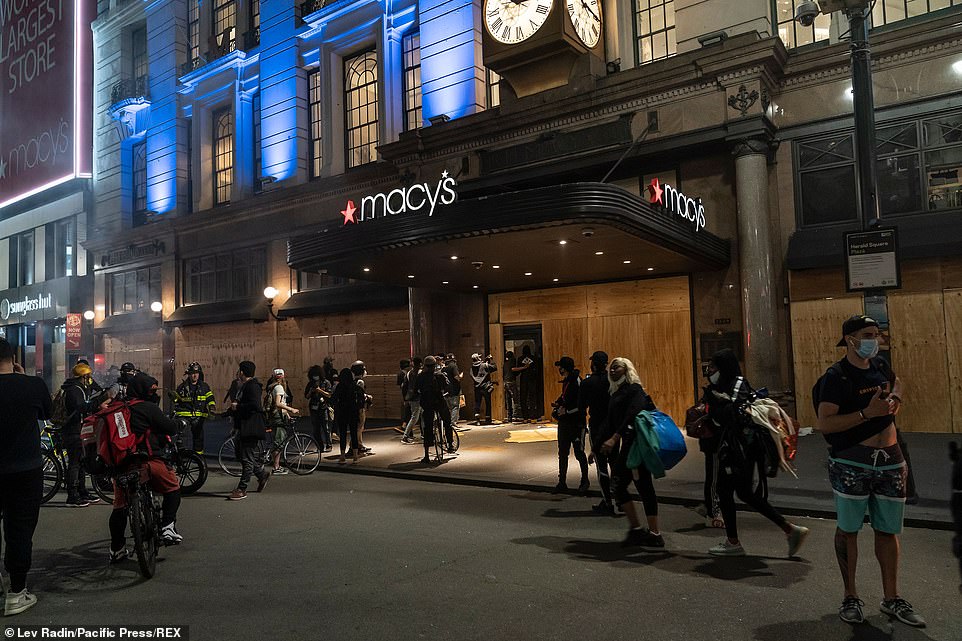 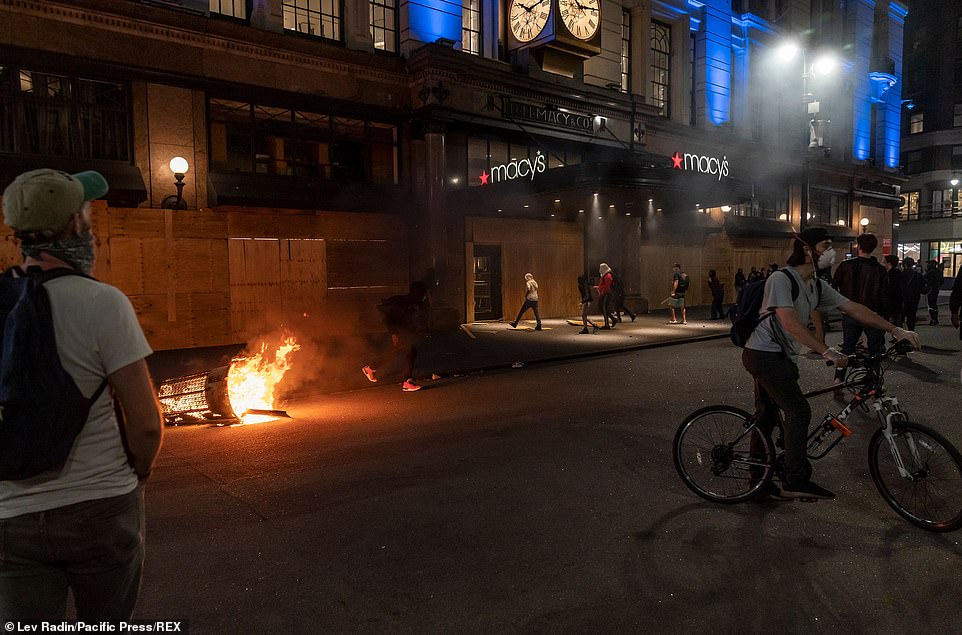 A trash can set on fire following looting at Macy’s Herald Square, its flagship NYC store, in June 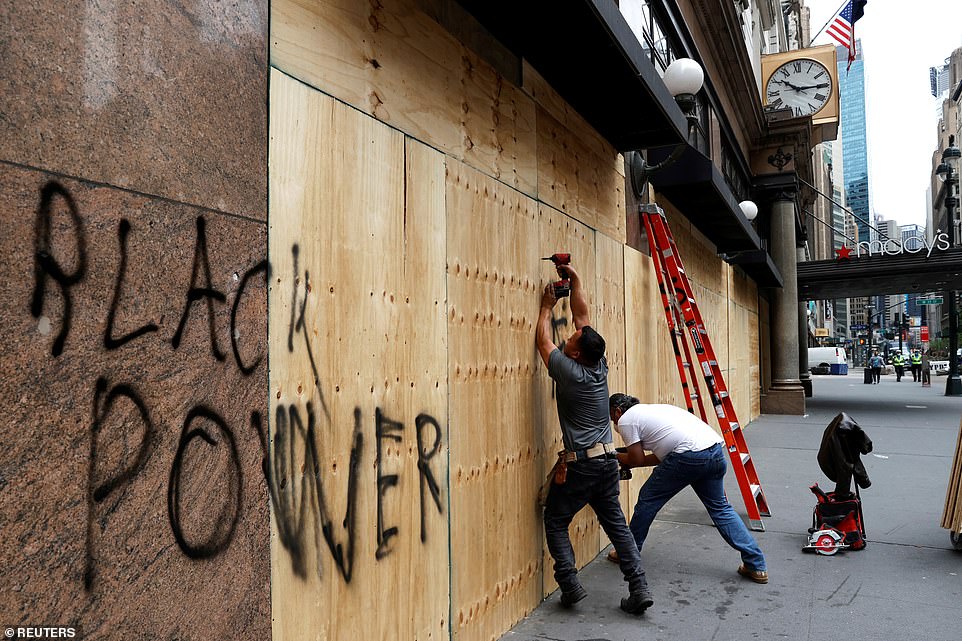 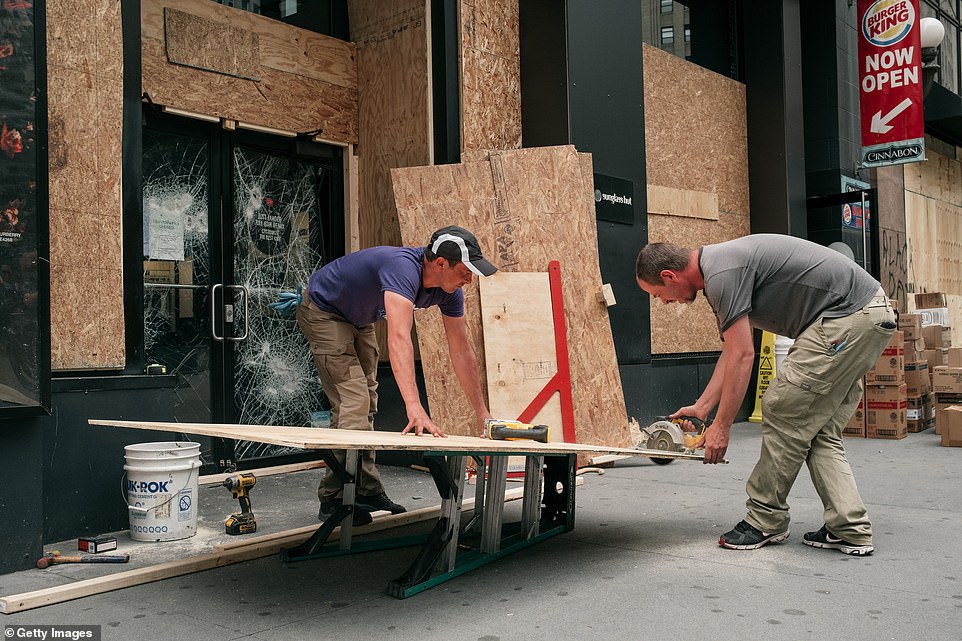 In spite of a police-enforced 11pm curfew, Macy’s was among dozens of shops that were were ransacked  in June 2 following violent clashes between the NYPD and protesters. It boarded up its windows again on election night 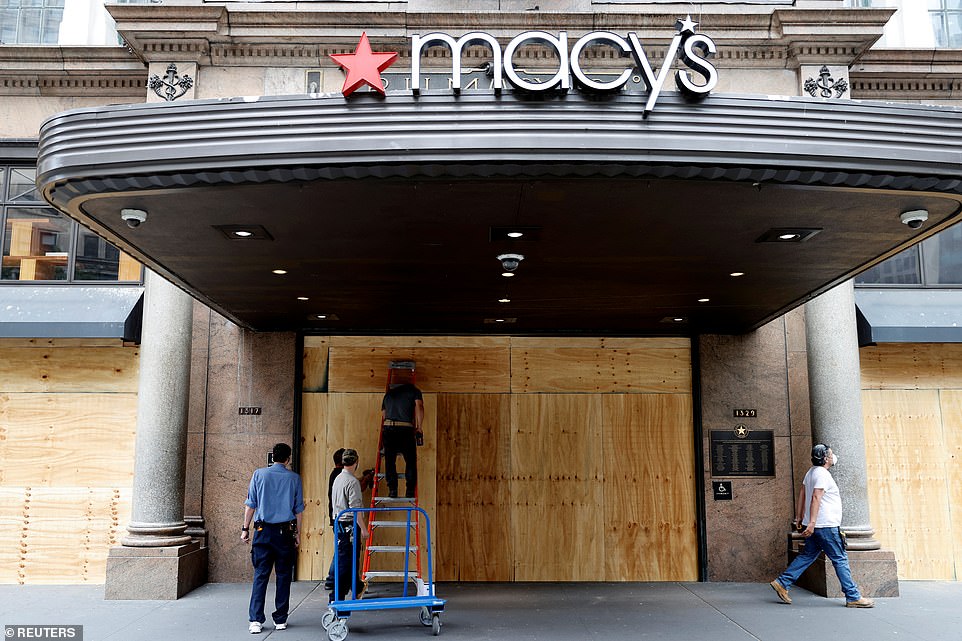 The city may not reach an additional 10 million by the end of 2020. That figure would also include the healthcare workers who arrived in the city to help at the peak of the pandemic.

As Mayor Bill de Blasio warned on Friday that the city could be placed into the orange zone by the first week of December as COVID-19 positivity rates increase, the tourism industry faces being wiped out – along with its $46 billion revenue stream and 400,000 jobs.

Broadway has already confirmed it will remain shut until at least summer next year.

The extended shutdown means New York City will lose out on $14.8 billion in revenue created by Broadway related tourism. At least 97,000 people who work in various theater-related jobs will remain unemployed. 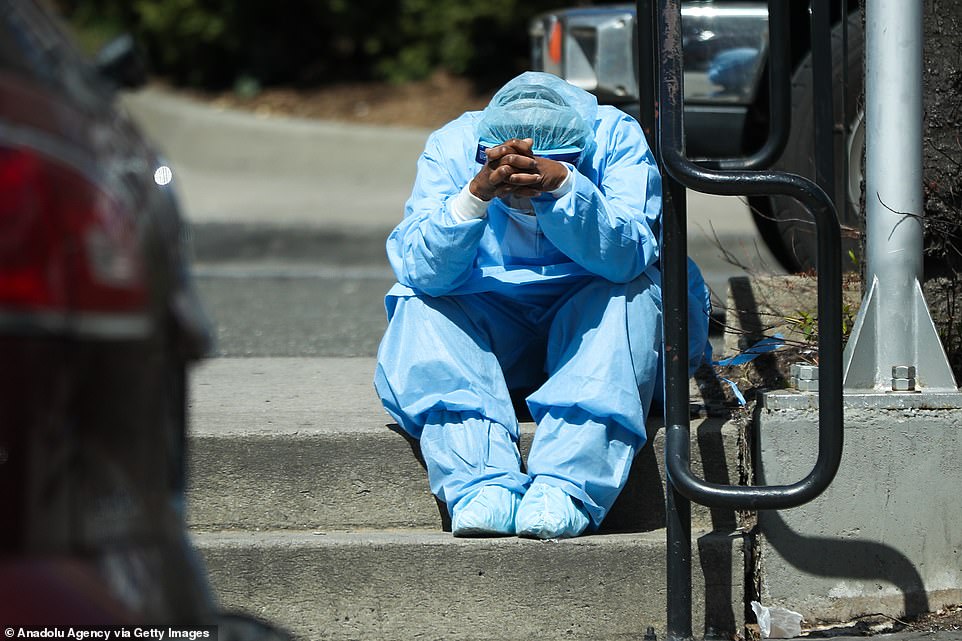 The Macy’s holiday window display reveals a tribute to the Big Apple’s frontline workers. Pictured, a sad and tired healthcare worker is seen by the Brooklyn Hospital Center in New York on April 1 when the city’s outbreak was at its worst 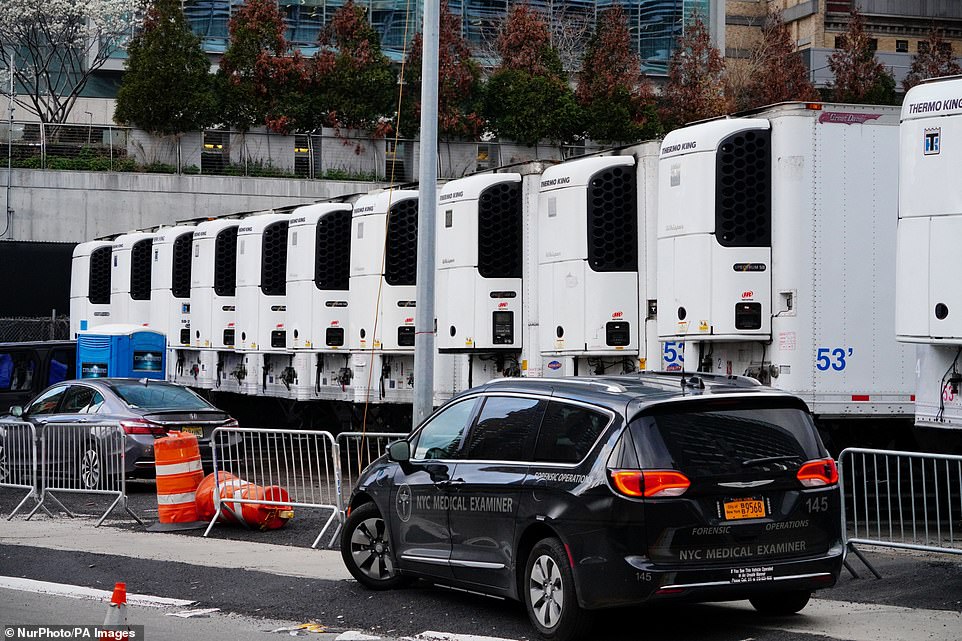 The display also offers a thank you to the ‘true grit’ of New Yorkers who stayed in the city throughout the pandemic and the Big Apple’s healthcare staff. Pictured, a row of parked refrigeration units serving as a temporary morgues in April

Macy’s famed holiday window displays have been a staple of the holiday seasons in NYC since 1874 when R. H. Macy debuted the nation’s first Christmas windows at his store on 14th Street.

It was also the first store to feature interactive windows in 1899.

Now almost 150 years later, most of the major stores in the Big Apple feature some kind of holiday display in their windows that attract floods of tourists.

The Macy’s display requires the work of one hundred workers, including artists, animators, carpenters, electricians, and lighting experts, to bring the displays to life.

The 2020 windows can be viewed at Herald Square on the Broadway side of the flagship store between now and New Year’s Day. 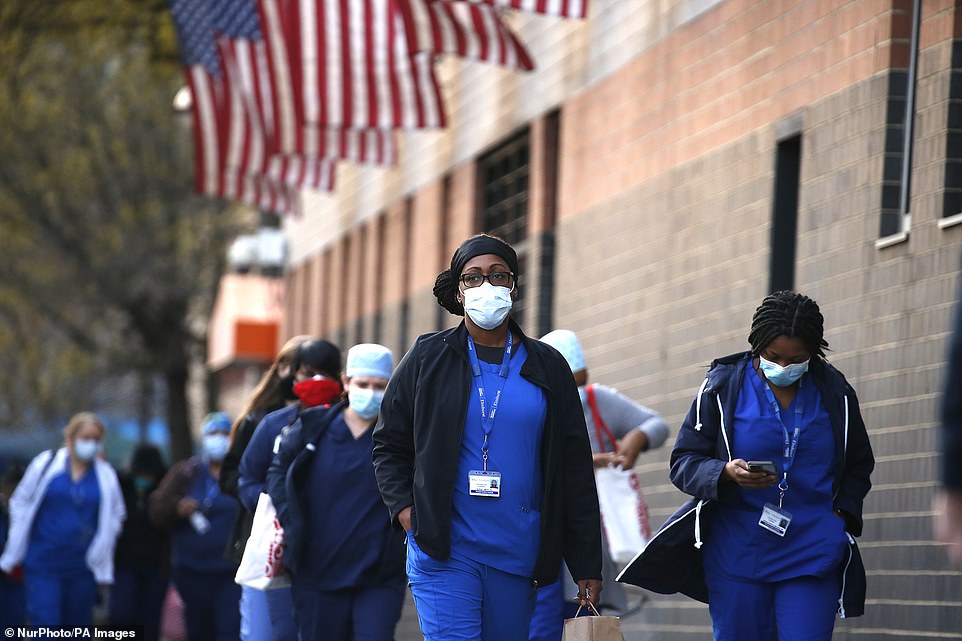 The display features a tribute to the city’s frontline workers. Pictured, Nurses arrive to Elmhurst Hospital in New York in April