Psaki had been asked if President Joe Biden had been briefed about the shooting that took place Tuesday, that happened around the same time as officer Derek Chauvin was rendered guilty on all three murder and manslaughter counts for last year’s killing of Minneapolis black man George Floyd.

The press secretary confirmed Biden was aware of the Columbus, Ohio incident – as Columbus police released bodycam footage earlier Wednesday that appeared to show Bryant wielding a knife at another woman before being shot dead.

‘The killing of 16-year-old Ma’Khia Bryant by the Columbus police is tragic,’ the White House press secretary said. ‘She was a child.’ 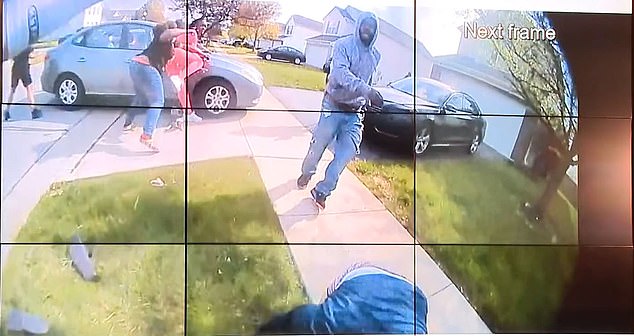 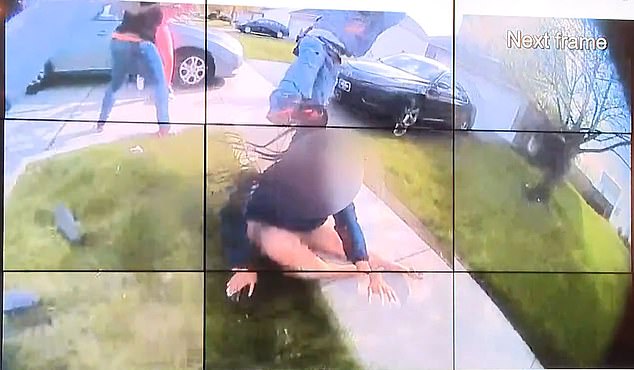 Bryant can be seen with a knife as she storms out of the home and towards another woman, with the woman falling backwards. She storms off to another woman as the first woman is kicked in the head by a man

‘We’re thinking of her friends and family in the communities that are hurting and grieving her loss,’ Psaki continued.

‘We know that police violence disproportionately impacts black and Latino people in communities and that black women and girls, like black men and boys experience higher rates of police violence,’ she added.

Psaki spoke of the ‘particular vulnerabilities’ children in foster care – like Bryant – face.

‘And her death came, as you noted, just as America was hopeful of a step forward after the traumatic and exhausting trial of Derek Chauvin and the verdict that was reached,’ Psaki said.

‘So our focus is on working to address systemic racism and implicit bias head on and, of course to passing laws and legislation that will put much needed reforms into place in police departments around the country,’ the press secretary added.

Psaki’s comments come a day after the spent the bulk of the press briefing taking questions on why Biden weighed in on the Chauvin case to reporters in the Oval Office Tuesday morning.

‘I’m praying the verdict is the right verdict. Which is – I think it’s overwhelming in my view,’ Biden had said.

Psaki also faced questions on why the White House wouldn’t condemn remarks made by Rep. Maxine Waters who had said Saturday while participating in a protest in Minneapolis that Black Lives Matter activists needed to ‘get more confrontational’ if Chauvin was found not guilty.

House Republicans went so far as to try to censure the Democratic House member.

The effort failed as Democrats are a majority in the House.

Psaki pointed to Waters’ own clarification of her comments that included a vow that she was ‘non-violent.’ 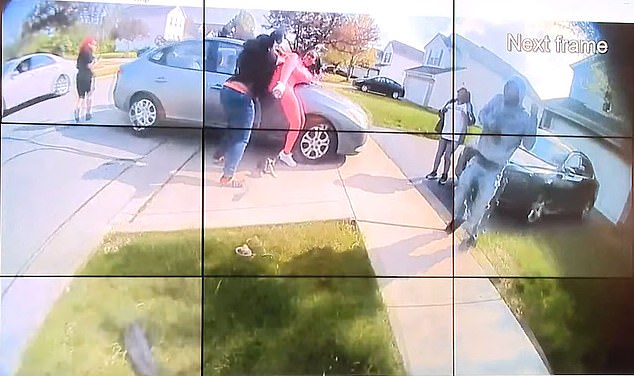 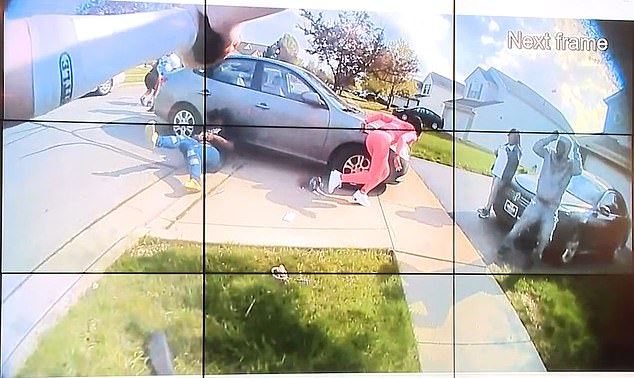 As Bryant falls to the ground, the person she was after runs from the gunfire 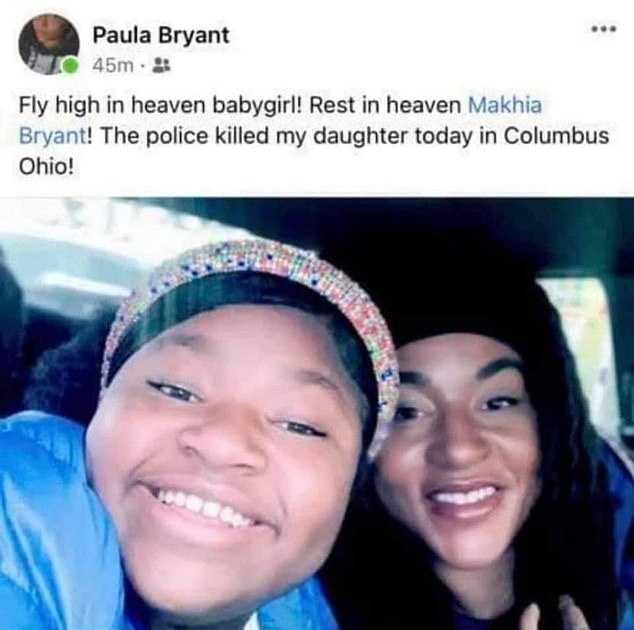 In the Wednesday briefing, Psaki confirmed that Biden would use the ‘bully pulpit,’ as it’s called, to address police violence during his first joint Congressional address next week.

‘I think he’s promising to the Floyd family that he will use the power of his presidency, the bully pulpit, as he intends to do during his joint address next week,’ she said. 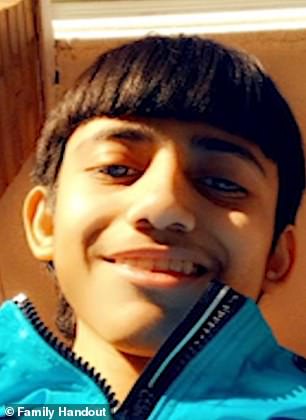 Psaki made similar comments when asked by DailyMail.com on Friday about the police shooting of 13-year-old Adam Toledo in Chicago

During a president’s first year in office the address is not called a ‘State of the Union,’ but it serves the same purpose.

Biden is pushing the Senate to pass the George Floyd Justice in Policing Act, which was already passed in the House.

There’s a higher hurdle to get it passed in the Senate, despite Democrats’ slim majority, because it would need to get 60 votes.

Psaki’s response to the Columbus shooting was similar to when DailyMail.com asked her Friday about the killing of Adam Toledo, a 13-year-old black boy in Chicago.

Psaki said she hadn’t spoken to the president before the morning briefing, so didn’t know if he’d watched the bodycam footage, but said it served as a ‘reminder’ that ‘too often in this country law enforcement uses unnecessary force, too often resulting in the death of black and brown Americans.’

She said the shooting was unnecessary after Chicago cops released bodycam footage showing the boy had a gun and dropped it just before the officer opened fire.

Photos also show a weapon recovered from the scene.

Columbus Police said that one person was killed in the officer-involved shooting that took place on the east side of Columbus, Ohio, on Tuesday afternoon. A woman at the scene – identified on Facebook as Shonnell Kelley – shared a series of videos from the shooting, including one of the officer who allegedly shot the teen 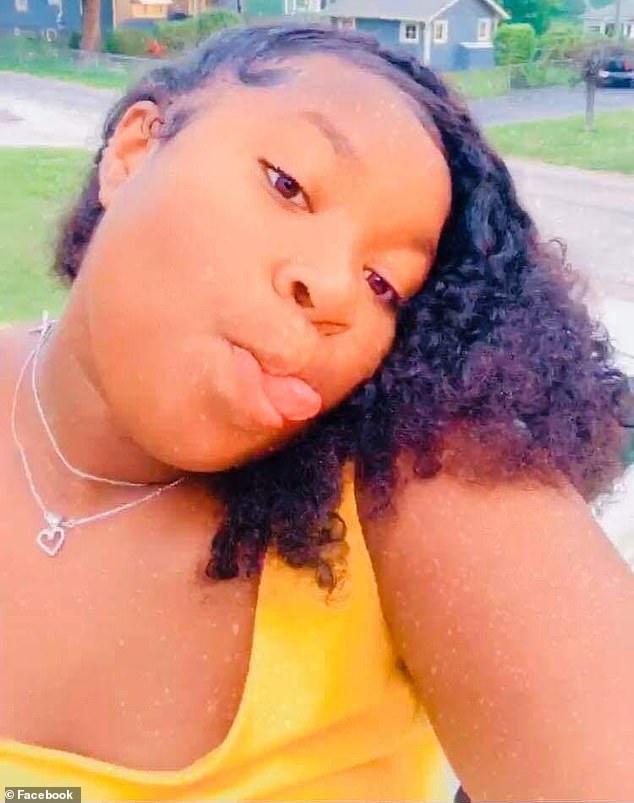 Makhia Bryant – identified by her mother on social media – was taken to Mount Carmel East hospital in critical condition but was pronounced dead at 5.21pm 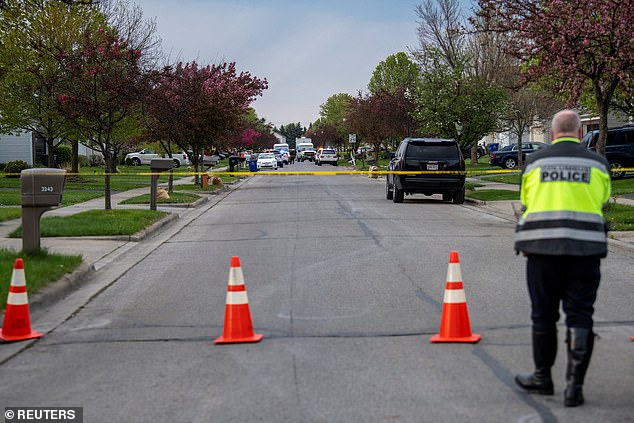 Authorities said they had been responding to an initial stabbing call at around 4.30pm. The shots fire call was made just 15 minutes later

‘The president, again, has repeatedly said that he believes we need police reform,’ she told reporters. ‘That’s what he says he’s calling for Congress to send to his desk.’

Psaki also said the White House was also waiting to see how the independent investigation of Toledo’s shooting would play out.

The footage appears to show the 16-year-old holding a knife.

Bryant is shown running out of her home toward another woman.

The woman flies backward – and then runs off as the officer shoots Bryant.

The officer has not been publicly identified.

Bryant was living in a foster home away from her mother, Paula, who said, ‘This never should have happened. She’s a loving girl.’