The UN’s atomic watchdog has today said that it is ‘deeply concerned’ by the possible presence of nuclear material at an undeclared site in Iran.

‘The agency is deeply concerned that undeclared nuclear material may have been present at this undeclared location and that such nuclear material remains unreported by Iran under its safeguards agreement,’ a report from the International Atomic Energy Agency said.

Iran’s stockpile of enriched uranium is now more than 14 times over the limit set down in its 2015 deal with world powers, the UN’s nuclear agency said.

The limit in the 2015 deal was set at 300 kilos (660 pounds) of enriched uranium in a particular compound form, which is the equivalent of 202.8 kilos of uranium in non-compound form.

The UN’s atomic watchdog also said its inspectors have confirmed that Iran has started enriching uranium up to 20 per cent purity, a technical step away from weapons-grade levels.

It is the latest in a string of violations of the 2015 nuclear deal with world powers. 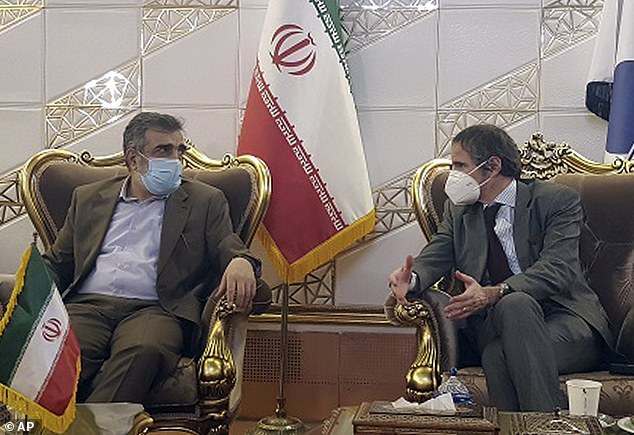 The International Atomic Energy Agency reported in a confidential document distributed to member countries, and seen by the Associated Press, that as of February 16 Iran had added 17.6kg (38.8lb) of uranium enriched to 20 per cent to its stockpile.

The nuclear deal signed in 2015 with the US, Germany, France, Britain, China and Russia, known as the Joint Comprehensive Plan of Action, or JCPOA, allows Iran only to keep a stockpile of 202.8kg (447lb).

It also allows enrichment only up to 3.67 per cent.